SQL written by engineers for logical databases and tables cannot be directly executed in real databases.

SQL rewriting is used to rewrite logical SQL into SQL that can be executed correctly in real databases. It includes rewriting for correctness and rewriting for optimization.

The identifiers that need to be overwritten include table names, index names, and Schema names.

Rewriting table names is the process of finding the location of the logical table in the original SQL and rewriting it into a real table.

Table name rewriting is a typical scenario that requires SQL parsing. For example, if logical SQL is:

Assume that the SQL is configured with the shard key order_id and order_id=1, it will be routed to shard table 1. Then the rewritten SQL should be:

In the simplest SQL scenario, it doesn’t seem to matter whether or not the SQL is parsed into an abstract syntax tree.

SQL can be rewritten correctly only by finding and replacing strings. However, it is impossible to achieve the same effect in the following scenarios.

The correct rewritten SQL would be:

Because there may be characters similar to the table name, you cannot rewrite SQL simply by replacing strings.

The above SQL uses the table name as an identifier of the field, so it needs to be modified when SQL is rewritten:

If a table alias is defined in SQL, the alias does not need to be modified, even if it is the same as the table name. For example:

Rewriting the table name is enough for SQL rewriting.

The index name is another identifier that can be rewritten. In some databases (such as MySQL and SQLServer), indexes are created in the dimension of tables.

In ShardingSphere, schemas are managed in the same way as tables. Logical Schemas are used to manage a set of data sources.

Therefore, ShardingSphere needs to replace the logical Schema written by the user in SQL with the real database Schema.

Schema rewriting refers to the rewriting of a logical Schema using unicast routing to a correct and real Schema that is randomly found.

There are two cases that need to complement columns in a query statement. In the first case, ShardingSphere needs to get the data during the result merge, but the data is not returned by the queried SQL.

If the selection does not contain the columns required to merge the results, you need to fill the columns, as in the following SQL:

Since the original SQL does not contain the user_id required in the result merge, you need to fill in and rewrite the SQL. Then SQL would be:

It should be noted that only missing columns are complemented instead of all columns. And SQL that contains * in the SELECT statement will also selectively complement columns based on the metadata information of the table. Here is a relatively complex column derivation scenario of SQL:

The second case of column derivation is the use of AVG aggregate functions. In distributed scenarios, using (avg1 + avg2 + avg3)/3 to calculate the average is incorrect and should be rewritten as (sum1 + sum2 + sum3) /(count1 + count2 + count3). In this case, rewriting the SQL containing AVG to SUM and COUNT is required, and recalculating the average when the results are merged. For example:

The above SQL should be rewritten as:

Then you can calculate the average correctly by merging the results.

If the INSERT SQL does not contain the column name of the table, ShardingSphere can also compare the number of parameters and the number of columns in the table meta information and automatically generate auto-increment primary keys. For example, the original SQL is:

The rewritten SQL will simply add the auto-increment primary key in the column order in which the primary key locates:

If you use placeholders to write SQL, you only need to rewrite the parameter list, not the SQL itself.

The scenario of acquiring pagination data from multiple databases is different from that of one single database. If every 10 pieces of data are taken as one page, the user wants to take the second page of data. It is not correct to acquire LIMIT 10, 10 under sharding situations, or take out the first 10 pieces of data according to sorting conditions after merging. For example, if SQL is: 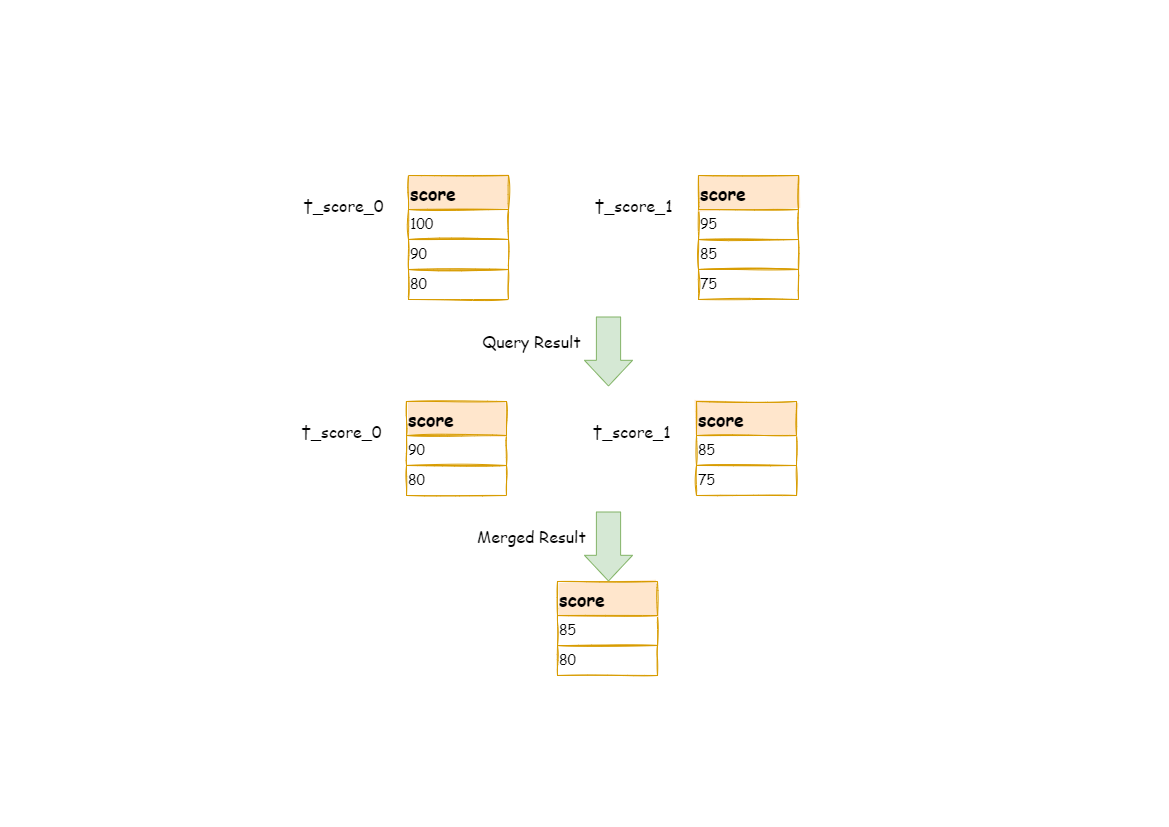 As shown in the picture, if you want to acquire the second and the third piece of data sorted by score in both tables, and they are supposed to be 95 and 90.

Since executed SQL can only acquire the second and the third piece of data from each table, i.e., 90 and 80 from t_score_0, 85 and 75 from t_score_1. When merging results, it can only merge from 90, 80, 85 and 75 already acquired, so the right result cannot be acquired anyway.

The right way is to rewrite pagination conditions as LIMIT 0, 3, take out all the data from the first two pages and calculate the right data based on sorting conditions. The following picture shows the execution results of pagination after SQL rewrite. 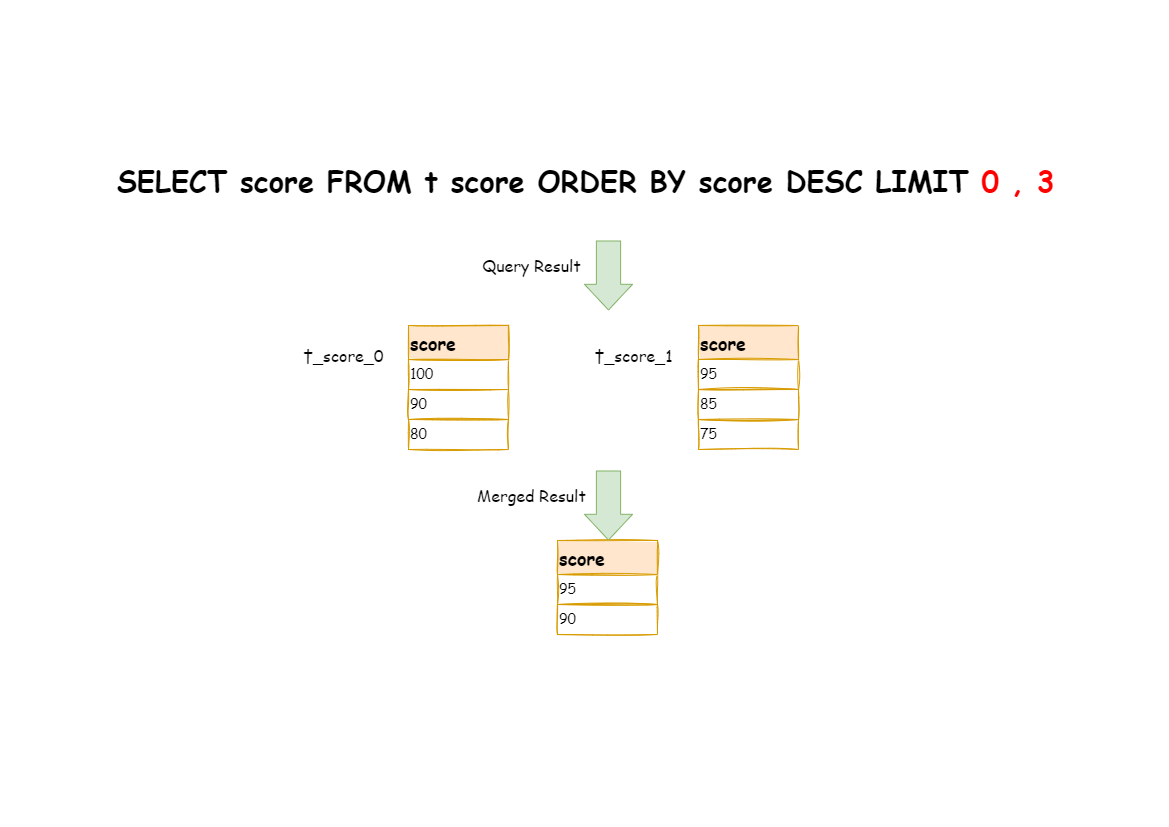 The latter the offset position is, the lower the efficiency of using LIMIT pagination will be. There are many ways to avoid using LIMIT as pagination method, such as constructing a secondary index to the number of line records and line offsets or using the end ID of the last pagination data as a condition for the next query.

When revising pagination information, if the users use the placeholder to write SQL, they only need to rewrite the parameter list rather than SQL itself.

When using bulk inserted SQL, if the inserted data crosses shards, the SQL needs to be rewritten to prevent excess data from being written to the database.

If the database is still divided into two parts according to the odd and even number of order_id, this SQL will be executed after its table name is revised. Then, both shards will be written with the same record.

Though only the data that satisfies sharding conditions can be retrieved from the query statement, it is not reasonable for the schema to have excessive data. So SQL should be rewritten as:

IN query is similar to batch insertion, but IN operation will not lead to wrong data query result. Through rewriting IN query, the query performance can be further improved. See the following SQL:

The SQL is rewritten as：

Though the execution result of SQL is right, it did not achieve the highest query efficiency.

Its purpose is to effectively improve performance without influencing the correctness of the query. It can be divided into single node optimization and stream merger optimization.

It refers to the optimization that stops the SQL rewrite from the route to the single node. After acquiring one route result, if it is routed to a single data node, there is no need to involve result merger, as well as rewrites such as column derivation and pagination information correction.

In particular, there is no need to read from the first piece of information, which reduces the pressure on the database to a large extent and saves meaningless consumption of the network bandwidth.

It only adds ORDER BY and ordering items and sorting orders identical with grouping items to SQL that contains GROUP BY. And it is used to transfer memory merger to stream merger. Stream merger and memory merger will be explained in detail in the result merger section.

The overall structure of the rewrite engine is shown in the following picture. 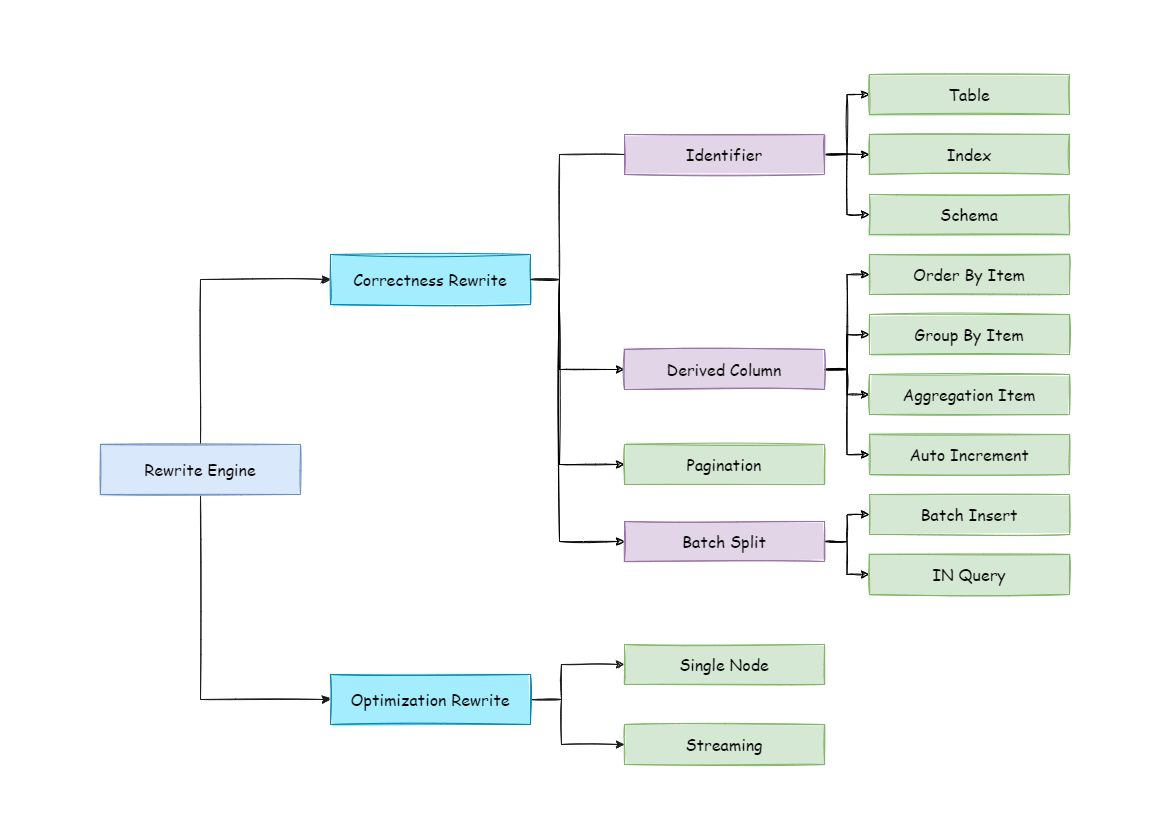