Result merger refers to merging multi-data result sets acquired from all the data nodes as one result set and returning it to the requesting client correctly.

Stream merger means that each time the data is obtained from the result set is able to return the correct single piece of data line by line. It is the best fit with the native method of returning the result set of the database. Traversal, order-by, and stream group-by are all examples of the stream merger.

Memory merger needs to traverse all the data in the result set and store it in the memory first. After unified grouping, ordering, aggregation and other calculations, the data is packaged into the data result set accessed one by one and returned.

Because there is an ORDER BY statement in SQL, each data result has its own order. So it only needs to sort data value that the result set cursor currently points to, which is equal to sorting multiple ordered arrays. Therefore, order-by merger is the most suitable sorting algorithm in this scenario.

When merging ordered queries, ShardingSphere will compare current data values in each result set (which is realized by the Java Comparable interface) and put them into the priority queue. Each time when acquiring the next piece of data, it only needs to move down the result set cursor at the top of the queue, reenter the priority order according to the new cursor and relocate its own position.

Here is an instance to explain ShardingSphere’s order-by merger. The following picture is an illustration of ordering by the score. Data result sets returned by 3 tables are shown in the example and each of them has already been ordered according to the score, but there is no order between the 3 data result sets. Order the data value that the result set cursor currently points to in these 3 result sets. Then put them into the priority queue. The first data value of t_score_0 is the biggest, followed by that of t_score_2 and t_score_1 in sequence. Thus, the priority queue is ordered by the sequence of t_score_0, t_score_2 and t_score_1. 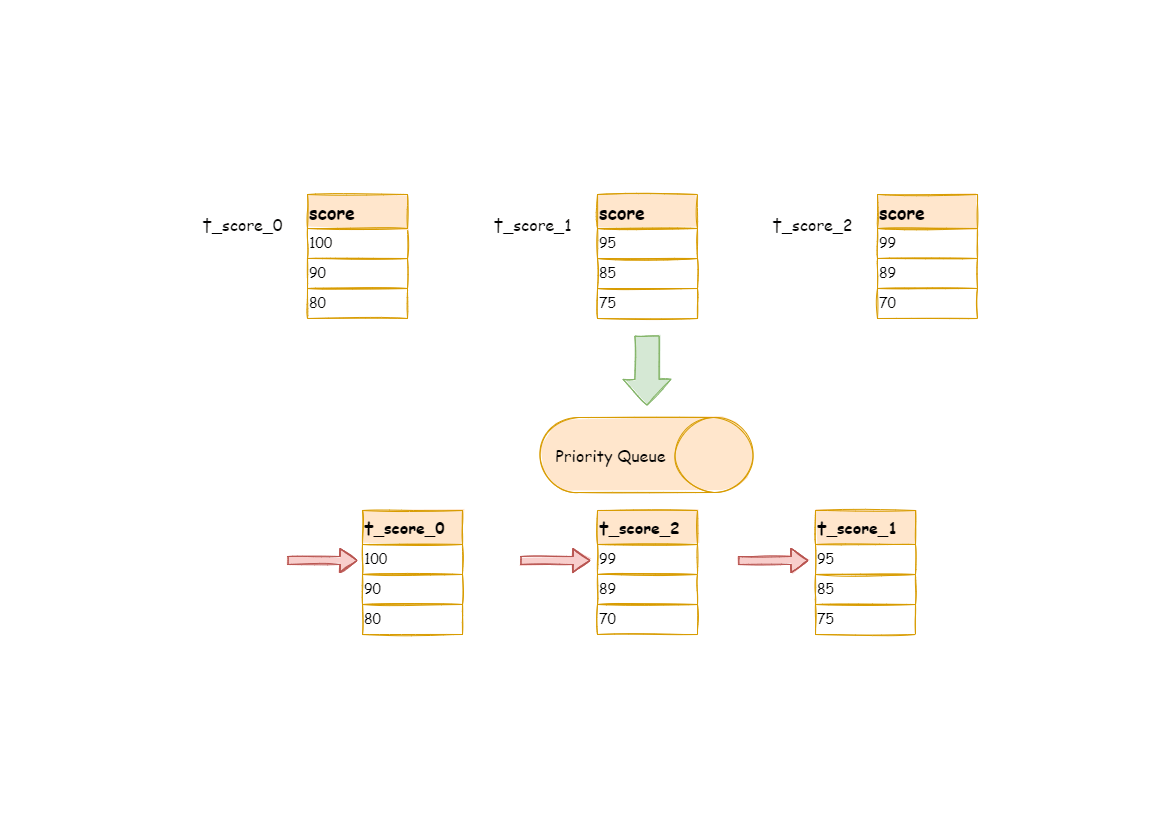 The following diagram illustrates how the order-by merger works when using next call. We can see from the diagram that when using the next call, t_score_0 at the first of the queue will be popped out. After returning the data value currently pointed by the cursor (i.e., 100) to the requesting client, the cursor will be moved down and t_score_0 will be put back into the queue.

In the second next call, t_score_2 in the first place is popped out. Its value pointed by the cursor of the data result set is returned to the client end, with its cursor moved down to rejoin the queue, and the following will be the same way. If there is no data in the result set, it will not rejoin the queue. 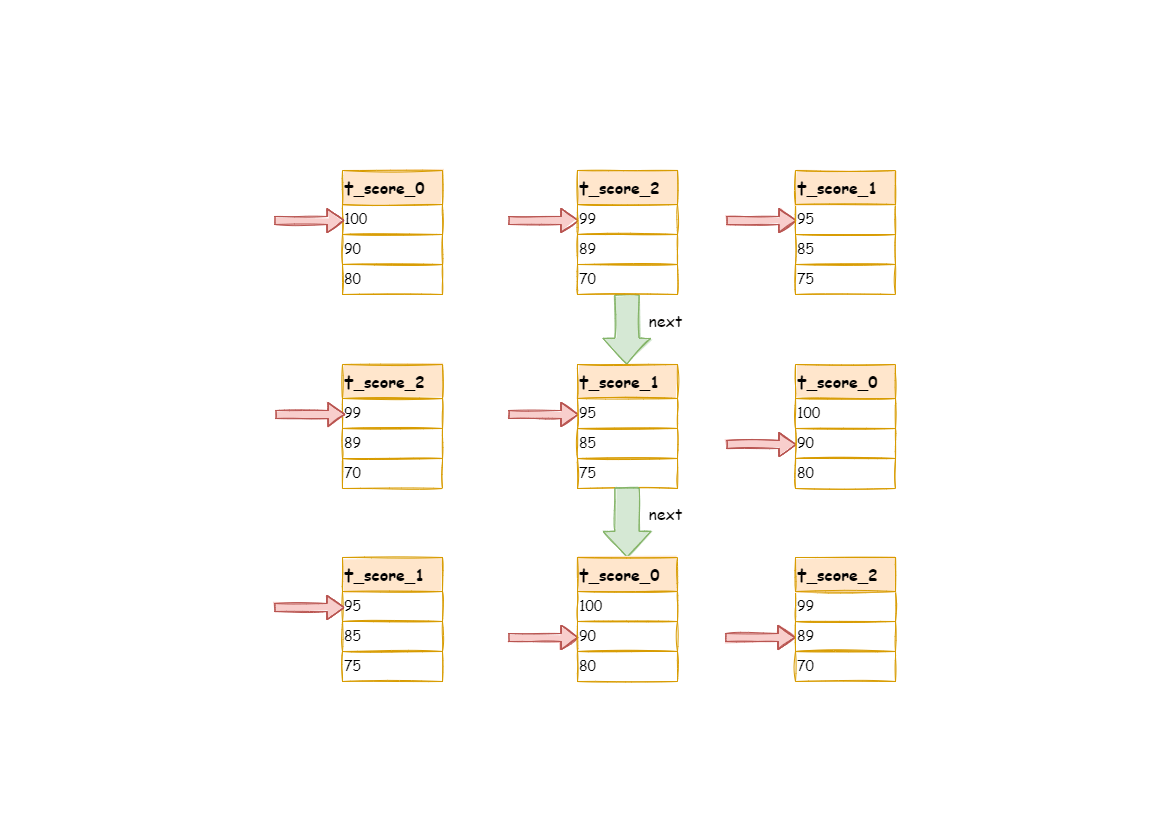 It can be seen that when data in each result set is ordered, but multiple result sets are disordered, ShardingSphere can still order them with no need to upload all the data to the memory. In the stream merger method, each next operation only acquires the right piece of data each time, which saves memory consumption to a large extent.

For instance, if it is sharded based on subject, the table structure contains the examinees’ name (to simplify, name repetition is not taken into consideration) and score. The following SQL is used to acquire each examinee’s total score:

When order-by item and group-by item are totally consistent, the data obtained is continuous. The data required by group-by is all stored in the data value that the data result set cursor currently points to. Thus, stream group-by merger can be used, as illustrated by the diagram: 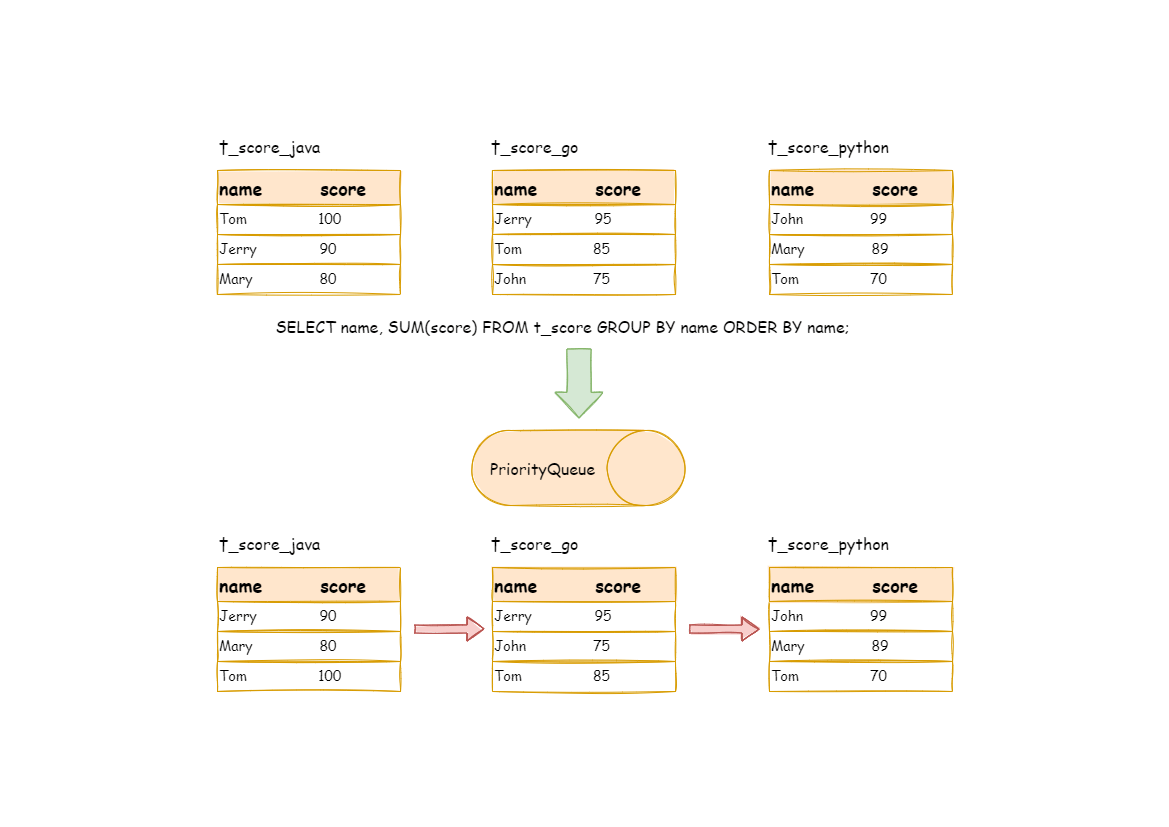 The merging logic is similar to that of order-by merger. The following picture shows how the stream group-by merger works in the next call. 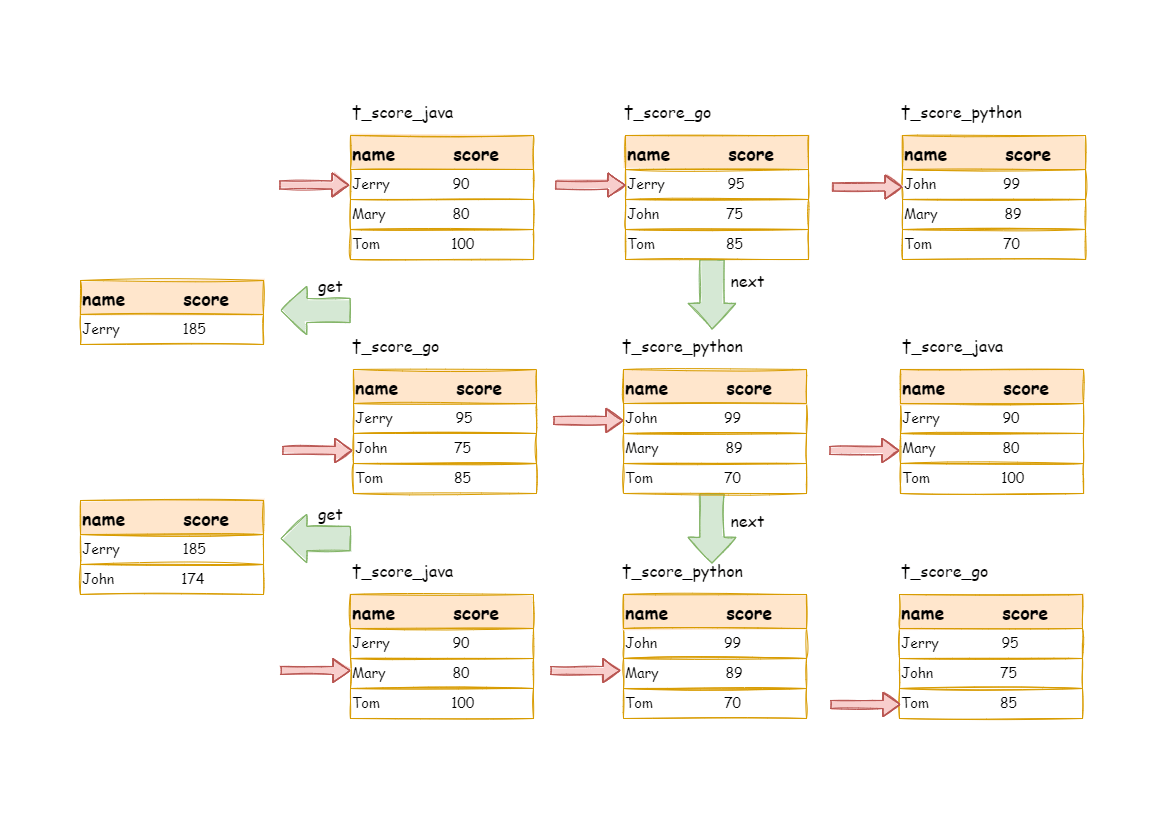 We can see from the picture that, in the first next call, t_score_java in the first place will be popped out of the queue, along with other result set data having the same grouping value of “Jerry”. After acquiring all the students’ scores with the name of “Jerry”, the accumulation operation will proceed. Hence, after the first next call is finished, the result set acquired is the sum of Jerry’s scores. At the same time, all the cursors in data result sets will be moved down to a different data value next to “Jerry” and reordered according to the current result set value. Thus, the data that contains the second name “John” will be put at the beginning of the queue.

Stream group-by merger is different from order-by merger only in two aspects:

For the inconsistency between the grouping item and ordering item, it requires uploading all the data to the memory to group and aggregate, since the relevant data value needed to acquire group information is not continuous, and stream merger is not available. For example, acquire each examinee’s total score through the following SQL and order them from the highest to the lowest:

Then, stream merger is not able to use, for the data taken out from each result set is the same as the original data of the order-by merger diagram in the upper half part structure.

When SQL only contains the group-by statement, according to different database implementations, its sorting order may not be the same as the group order. The lack of an ordering statement indicates the order is not important in this SQL. Therefore, through the optimization of SQL rewriting, ShardingSphere can automatically add the ordering item the same as the grouping item, converting it from the memory merger that consumes memory to the stream merger.

The comparison aggregation function refers to MAX and MIN. They need to compare all the result set data of each group and simply return the maximum or minimum value.

The sum aggregation function refers to SUM and COUNT. They need to sum up all the result set data of each group.

The average aggregation function refers only to AVG. It must be calculated through SUM and COUNT rewritten by SQL, which has been mentioned in the SQL rewriting section.

All the merger types above can be paginated. Pagination is the decorator added to other kinds of mergers. ShardingSphere strengthens its ability to paginate the data result set through decorator mode. The pagination merger is responsible for filtering unnecessary data.

ShardingSphere’s pagination function can be misleading to users in that they may think it will take a large amount of memory. In distributed scenarios, it can only guarantee the data correctness by rewriting LIMIT 10000000, 10 to LIMIT 0, 10000010. Users can easily misunderstand that ShardingSphere uploads a large amount of meaningless data to the memory and has the risk of memory overflow. Actually, it can be known from the principle of stream merger that only memory group-by merger will upload all the data to the memory. Generally speaking, SQL used for OLAP grouping, is often applied to massive calculations or small result generation, and it won’t generate vast result data. Except for memory group-by merger, other scenarios all use stream merger to acquire data result set. So ShardingSphere would skip unnecessary data through the next call method in the result set, rather than storing it in the memory.

But it should be noted that pagination with LIMIT is not the best practice, because a large amount of data still needs to be transmitted to ShardingSphere’s memory space for ordering. LIMIT cannot query data by index, so paginating with ID is a better solution if ID continuity can be guaranteed. For example:

Or query the next page through the ID of the last query result, for example:

The overall structure of the merger engine is shown in the following diagram: 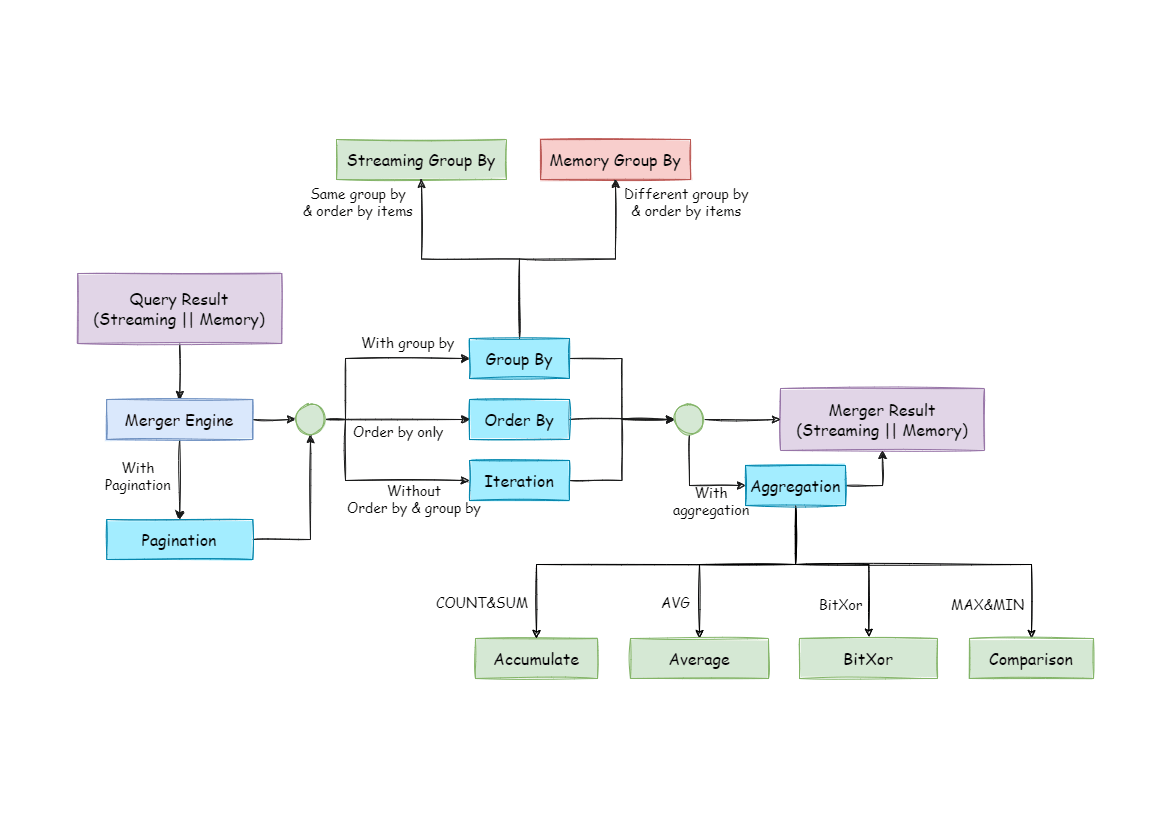