ShardingSphere uses an automated execution engine to safely and efficiently send the real SQL, which has been routed and rewritten, to the underlying data source for execution.

It does not simply send SQL directly to the data source for execution via JDBC, nor are execution requests placed directly into a thread pool for concurrent execution.

It focuses more on the creation of a balanced data source connection, the consumption generated by the memory usage, and the maximum utilization of the concurrency. The objective of the execution engine is to automatically balance resource control with execution efficiency.

From the perspective of resource control, the connection number a business can make to the database should be limited. It can effectively prevent certain business operations from occupying excessive resources, exhausting database connection resources, and influencing the normal access of other businesses.

Especially when one database instance contains many sub-tables, a logical SQL that does not contain any shard key will produce a large number of real SQLs that fall into different tables in one database. If each real SQL takes an independent connection, a query will undoubtedly take up excessive resources.

It is enough for independent database connections to maintain result set quotation and cursor position, and move the cursor when acquiring corresponding data.

Merging the result set by moving down its cursor is called the stream merger. It does not need to load all the query results into the memory, which can effectively save memory resources effectively and reduce the frequency of garbage collection.

On the one hand, we need to control and protect database connection resources; on the other hand, it is important to save middleware memory resources by adopting a better merging mode. How to deal with the relationship between the two is a problem that the ShardingSphere execution engine needs to solve. Specifically, if an SQL is sharded through the ShardingSphere, it needs to operate on 200 tables under a database instance. So, should we choose to create 200 connections in parallel, or one connection in sequence? How to choose between efficiency and resource control? For the above scenario, ShardingSphere provides a solution. It introduces the concept of Connection Mode, which is divided into MEMORY_STRICTLY and CONNECTION_STRICTLY.

The prerequisite to using this mode is that ShardingSphere does not restrict the connection number of one operation. If the actual executed SQL needs to operate 200 tables in some database instance, it will create a new database connection for each table and deal with them concurrently through multi-thread to maximize the execution efficiency. When SQL meets the conditions, stream merger is preferred to avoid memory overflow or frequent garbage recycling.

The MEMORY_STRICTLY mode applies to OLAP operation and can increase the system throughput by removing database connection restrictions. It is also applicable to OLTP operation, which usually has shard keys and can be routed to a single shard. So it is a wise choice to control database connections strictly to make sure that database resources in an online system can be used by more applications.

ShardingSphere initially leaves the decision of which mode to use up to the users and they can choose to use MEMORY_STRICTLY mode or CONNECTION_STRICTLY mode according to their actual business scenarios.

This solution gives users the right to choose, who must understand the pros and cons of the two modes and make a choice based on the requirements of the business scenarios. No doubt, it is not the best solution as it increases users’ learning and use costs.

This dichotomy solution, which leaves the switching of the two modes to static initialization, lacks flexibility. In practical scenarios, the routing result varies with SQL and placeholder indexes. This means that some operations may need to use memory merger, while others may prefer stream merger. Connection modes should not be set by the user before ShardingSphere is started, but should be determined dynamically based on the SQL and placeholder indexes scenarios.

In order to reduce the usage cost for users and achieve a dynamic connection mode, ShardingSphere has extracted the concept of the automatic execution engine to eliminate the connection mode concept internally. The user does not need to know what the MEMORY_STRICTLY mode and CONNECTION_STRICTLY mode are, but the execution engine automatically selects the best execution scheme according to the current scenario.

The execution engine is divided into two phases: preparation and execution.

Result set grouping is the key to realizing the internal connection model concept. According to the configuration items of maxConnectionSizePerQuery, the execution engine will choose an appropriate connection mode based on the current route result. 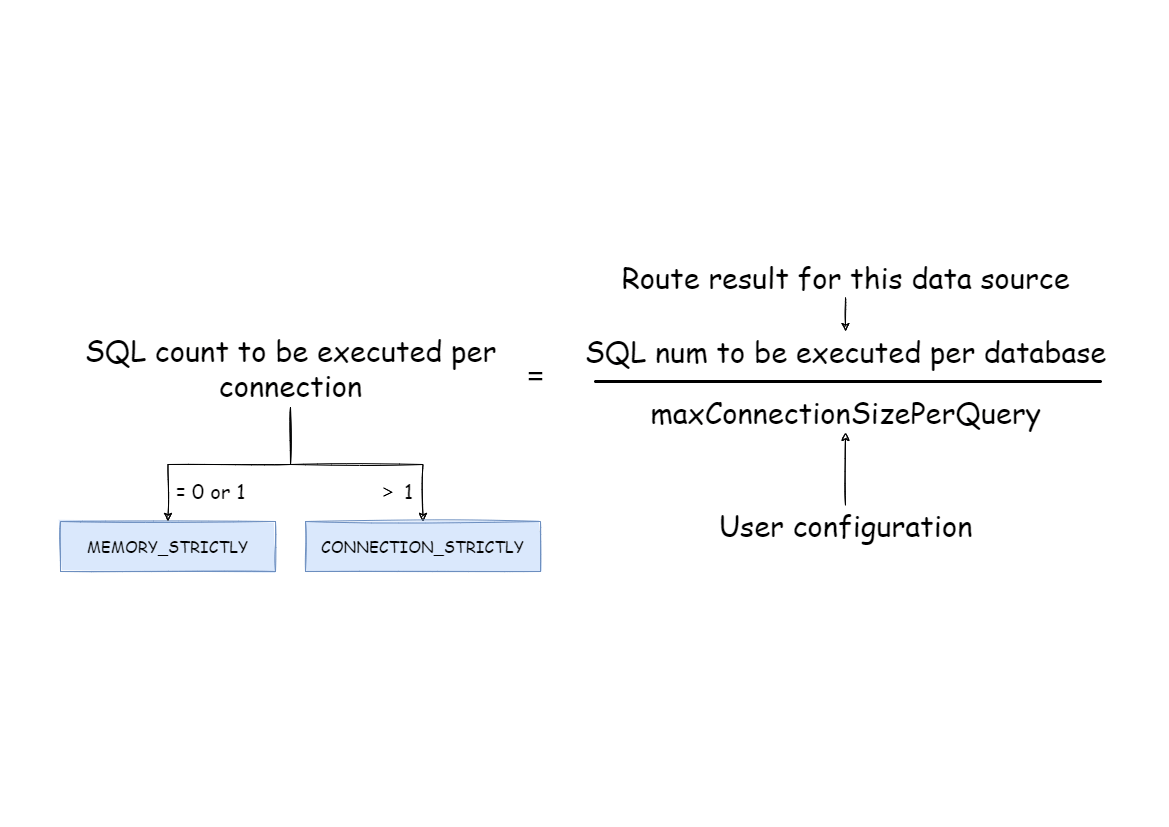 Within the scope of the maxConnectionSizePerQuery allowed, when the request number that one connection needs to execute is more than 1, the current database connection cannot hold the corresponding data result set, so it must use memory merger. On the contrary, when the number equals 1, the current database connection can hold the corresponding data result set, and it can use stream merger. 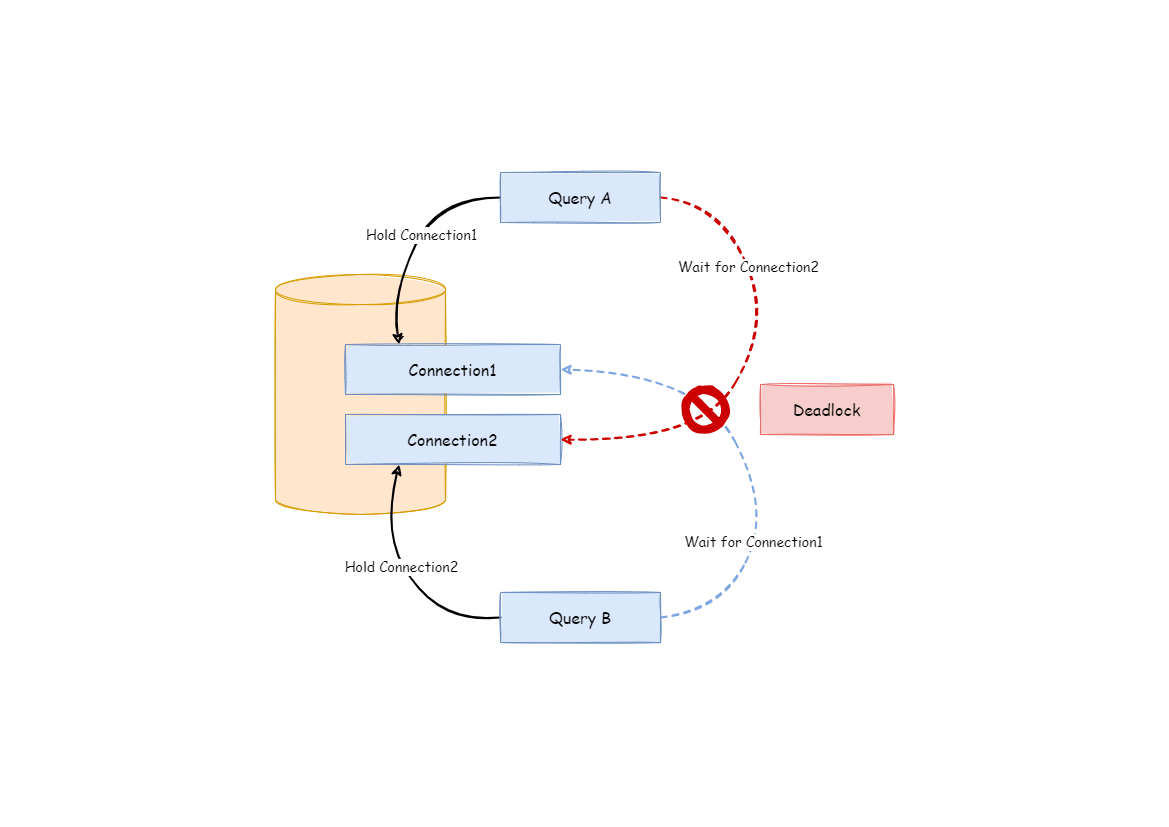 ShardingSphere synchronizes database connections to avoid deadlocks. When it creates the execution unit, it atomically obtains all the database connections required by the SQL request at one time, eliminating the possibility of obtaining partial resources in each query request.

Because the operation on the database is very frequent, locking a database connection each time when acquiring it will reduce the concurrency of ShardingSphere. Therefore, ShardingSphere has improved two aspects here:

This stage is used to actually execute SQL and is divided into two steps: group execution and merger result generation.

Group execution can distribute execution unit groups generated in the preparation phase to the underlying concurrency engine and send events for each key step during the execution process, such as starting, successful and failed execution events. The execution engine only focuses on sending events rather than subscribers to the event. Other ShardingSphere modules, such as distributed transactions, call linked tracing and so on, will subscribe to the events of interest and process them accordingly.

The overall structure of the execution engine is divided as shown below. 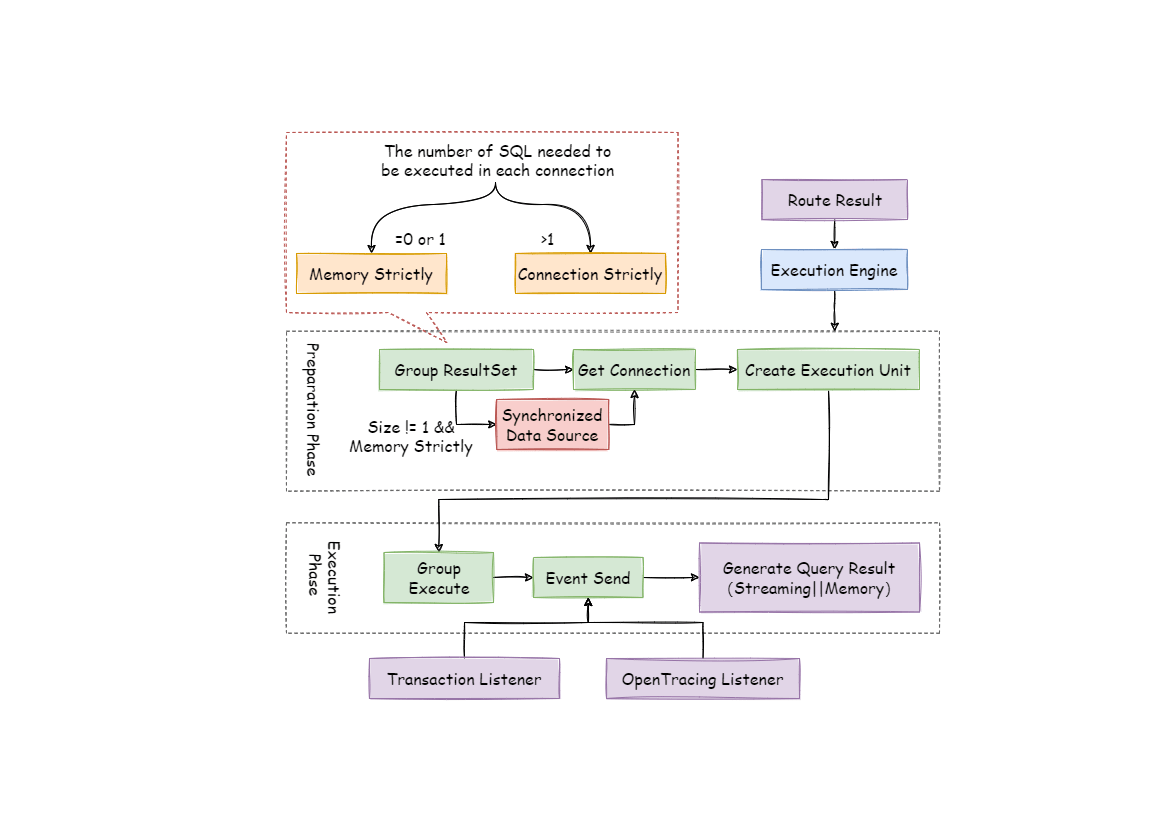