Security control has always been a crucial link of orchestration; data masking falls into this category. For both Internet enterprises and traditional sectors, data security has always been a highly valued and sensitive topic. Data masking refers to transforming some sensitive information through masking rules to safely protect the private data. Data involves client’s security or business sensibility, such as ID number, phone number, card number, client number and other personal information, requires data masking according to relevant regulations.

Because of that, ShardingSphere has provided data masking, which stores users’ sensitive information in the database after encryption. When users search for them, the information will be decrypted and returned to users in the original form.

ShardingSphere has made the encryption and decryption processes totally transparent to users, who can store desensitized data and acquire original data without any awareness. In addition, ShardingSphere has provided internal masking algorithms, which can be directly used by users. In the same time, we have also provided masking algorithm related interfaces, which can be implemented by users themselves. After simple configurations, ShardingSphere can use algorithms provided by users to perform encryption, decryption and masking.

Apache ShardingSphere is an ecosystem of open source distributed database middleware solutions. It consists of Sharding-JDBC, Sharding-Proxy, and Sharding-Sidecar (in planning) which are independent of each other, but can be used in mixed deployment. All of these can provide standardized data sharding, distributed transactions, and distributed governance functions, and can be applied to various situation such as Java homogeneous, heterogeneous languages, containers, cloud native, and so on.

The data encryption module belongs to the sub-function module under the core function of ShardingSphere distributed governance. It parses the SQL input by the user and rewrites the SQL according to the encryption configuration provided by the user, thereby encrypting the original data and storing the original data and store the original data (optional) and cipher data to database at the same time. When the user queries the data, it takes the cipher data from the database and decrypts it, and finally returns the decrypted original data to the user. Apache ShardingSphere distributed database middleware automates and transparentizes the process of data encryption, so that users do not need to pay attention to the details of data decryption and use decrypted data like ordinary data. In addition, ShardingSphere can provide a relatively complete set of solutions for the encryption of online services or the encryption function of new services.

The demand for data encryption is generally divided into two situations in real business scenarios: 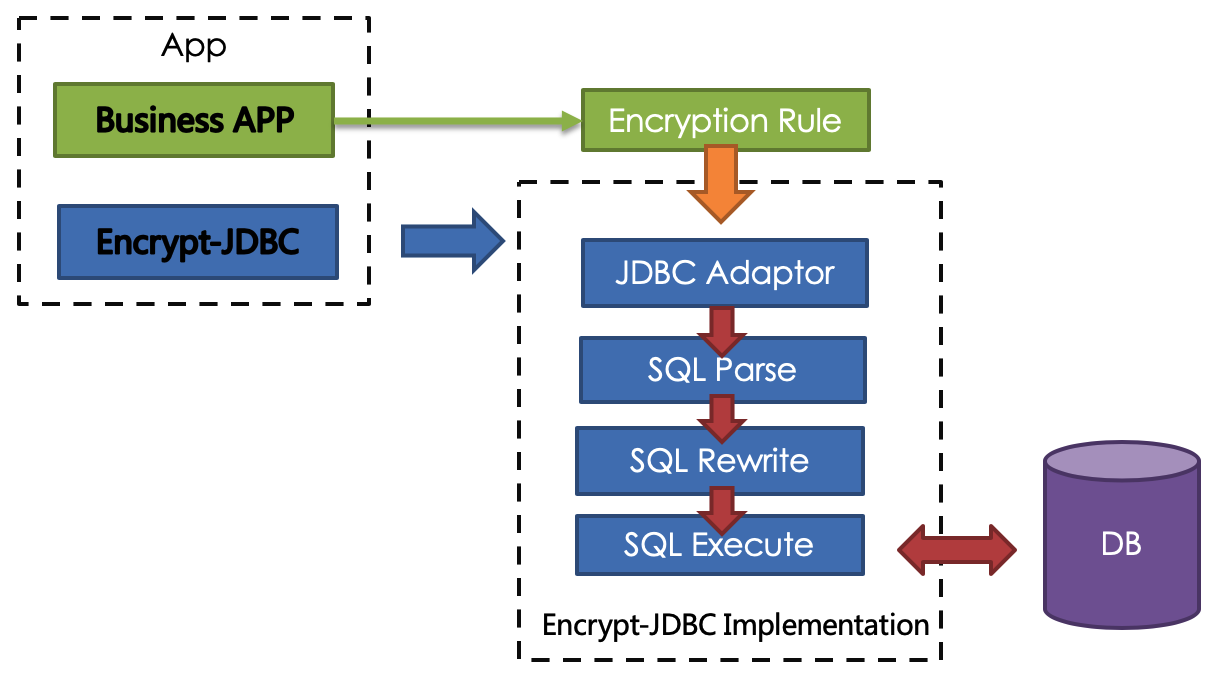 Encrypt-JDBC intercepts SQL initiated by user, analyzes and understands SQL behavior through the SQL syntax parser.According to the encryption rules passed by the user, find out the fields that need to be encrypted/decrypt and the encryptor/decryptor used to encrypt/decrypt the target fields, and then interact with the underlying database.ShardingSphere will encrypt the plaintext requested by the user and store it in the underlying database; and when the user queries, the ciphertext will be taken out of the database for decryption and returned to the end user.ShardingSphere shields the encryption of data, so that users do not need to perceive the process of parsing SQL, data encryption, and data decryption, just like using ordinary data. 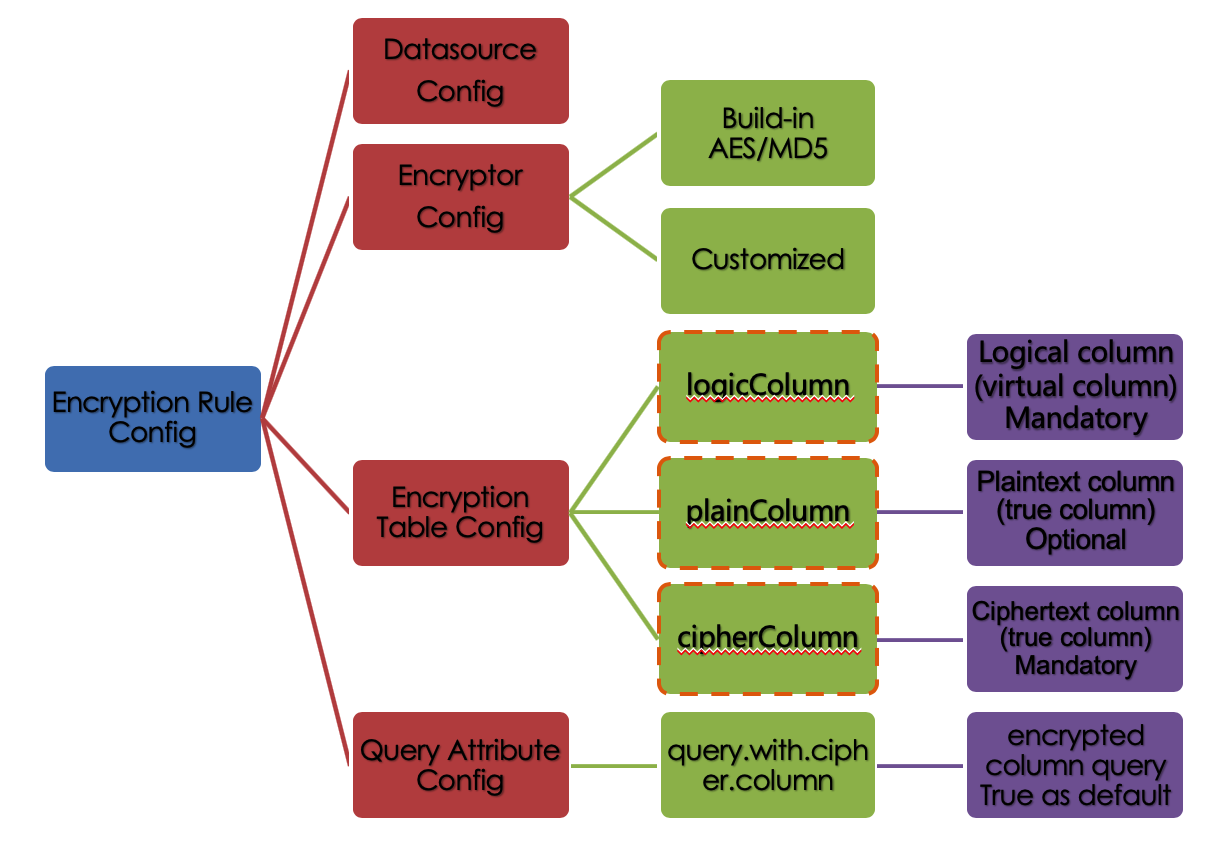 How to understand Which column do users want to use to write SQL (logicColumn)?

We can understand according to the meaning of Encrypt-JDBC. The ultimate goal of Encrypt-JDBC is to shield the encryption of the underlying data, that is, we do not want users to know how the data is encrypted/decrypted, how to store plaintext data in plainColumn, and ciphertext data in cipherColumn. In other words, we do not even want users to know the existence and use of plainColumn and cipherColumn. Therefore, we need to provide users with a column in conceptual. This column can be separated from the real column of the underlying database. It can be a real column in the database table or not, so that the user can freely change the plainColumn and The column name of cipherColumn. Or delete plainColumn and choose to never store plain text and only store cipher text. As long as the user’s SQL is written according to this logical column, and the correct mapping relationship between logicColumn and plainColumn, cipherColumn is given in the encryption rule.

Why do you do this? The answer is at the end of the article, that is, to enable the online services to seamlessly, transparently, and safely carry out data encryption migration.

For example, if there is a table in the database called t_user, there are actually two fields pwd_plain in this table, used to store plain text data, pwd_cipher, used to store cipher text data, and define logicColumn as pwd. Then, when writing SQL, users should write to logicColumn, that is, INSERT INTO t_user SET pwd = ‘123’. ShardingSphere receives the SQL, and through the encryption configuration provided by the user, finds that pwd is a logicColumn, so it decrypt the logical column and its corresponding plaintext data. As can be seen that ** ShardingSphere has carried out the column-sensitive and data-sensitive mapping conversion of the logical column facing the user and the plaintext and ciphertext columns facing the underlying database. **As shown below: 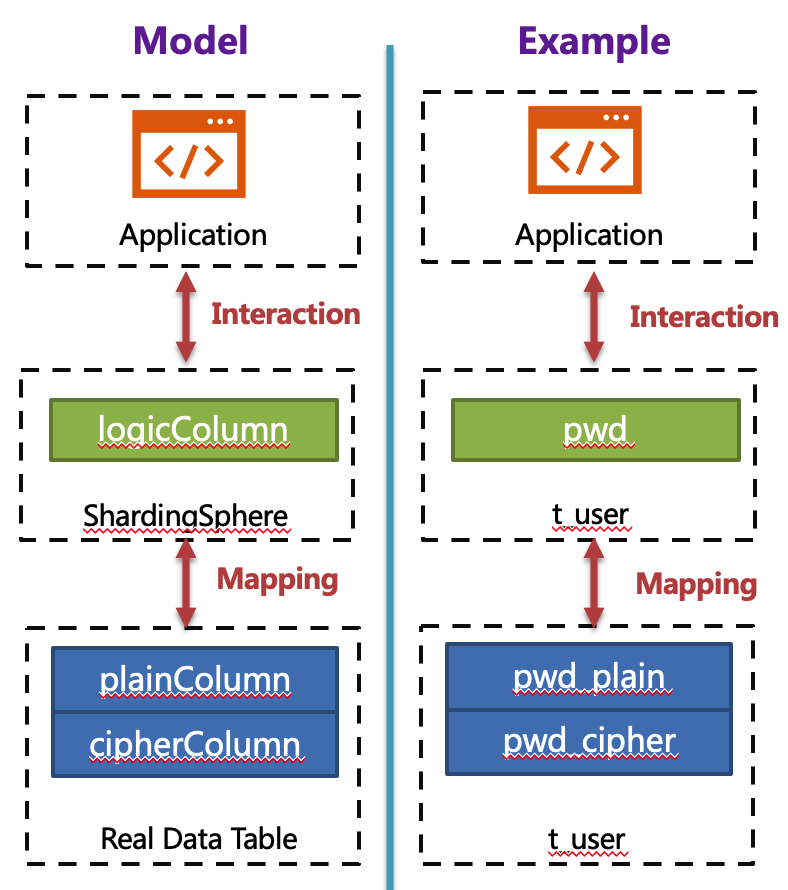 ** This is also the core meaning of Encrypt-JDBC, which is to separate user SQL from the underlying data table structure according to the encryption rules provided by the user, so that the SQL writter by user no longer depends on the actual database table structure. The connection, mapping, and conversion between the user and the underlying database are handled by ShardingSphere. ** Why should we do this? It is still the same : in order to enable the online business to seamlessly, transparently and safely perform data encryption migration. 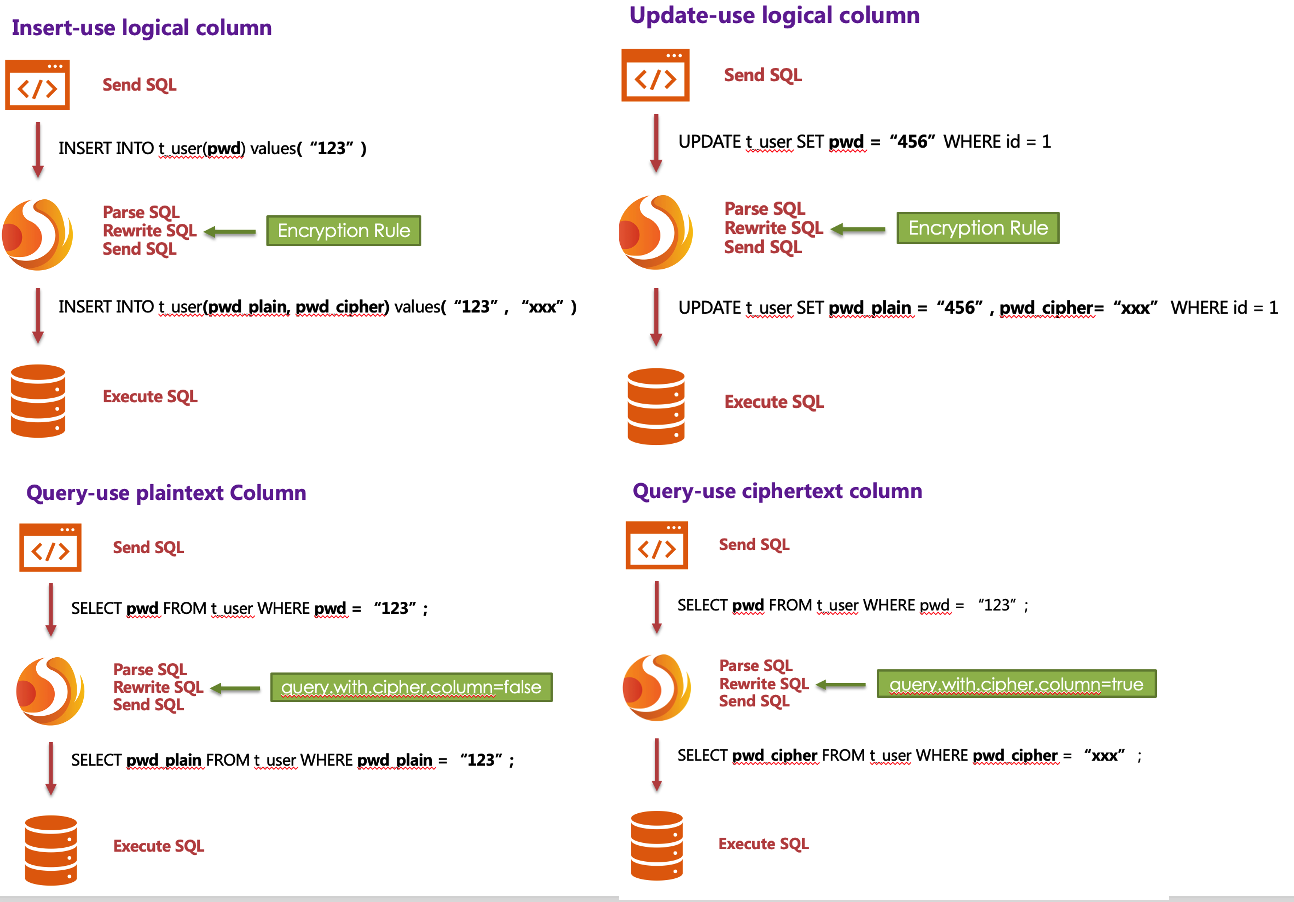 Business scenario analysis: The newly launched business is relatively simple because everything starts from scratch and there is no historical data cleaning problem.

Solution description: After selecting the appropriate encryptor, such as AES, you only need to configure the logical column (write SQL for users) and the ciphertext column (the data table stores the ciphertext data). It can also be different **. The recommended configuration is as follows (shown in Yaml format):

With this configuration, Encrypt-JDBC only needs to convert logicColumn and cipherColumn. The underlying data table does not store plain text, only cipher text. This is also a requirement of the security audit part. If users want to store plain text and cipher text together in the database, they just need to add plainColumn configuration. The overall processing flow is shown below:

Business scenario analysis: As the business is already running online, there must be a large amount of plain text historical data stored in the database. The current challenges are how to enable historical data to be encrypted and cleaned, how to enable incremental data to be encrypted, and how to allow businesses to seamlessly and transparently migrate between the old and new data systems.

Solution description: Before providing a solution, let ’s brainstorm: First, if the old business needs to be desensitized, it must have stored very important and sensitive information. This information has a high gold content and the business is relatively important. If it is broken, the whole team KPI is over. Therefore, it is impossible to suspend business immediately, prohibit writing of new data, encrypt and clean all historical data with an encrypter, and then deploy the previously reconstructed code online, so that it can encrypt and decrypt online and incremental data. Such a simple and rough way, based on historical experience, will definitely not work.

Business developers must hope: reduce the burden of capital costs, do not modify the business code, and be able to safely and smoothly migrate the system. So, the encryption function module of ShardingSphere was born. It can be divided into three steps:

So far, the online service encryption and rectification solutions have all been demonstrated. We provide Java, Yaml, SpringBoot, SpringNameSpace multiple ways for users to choose to use, and strive to fulfil business requirements. The solution has been continuously launched on JD Digits, providing internal basic service support.

The solution has provided two methods encrypt() and decrypt() to encrypt/decrypt data for encryption.

When users INSERT, DELETE and UPDATE, ShardingSphere will parse, rewrite and route SQL according to the configuration. It will also use encrypt() to encrypt data and store them in the database. When using SELECT, they will decrypt sensitive data from the database with decrypt() reversely and return them to users at last.

Currently, ShardingSphere has provided two types of implementations for this kind of masking solution, MD5 (irreversible) and AES (reversible), which can be used after configuration.

Compared with the first masking scheme, this one is more secure and complex. Its concept is: even the same data, two same user passwords for example, should not be stored as the same desensitized form in the database. It can help to protect user information and avoid credential stuffing.

This scheme provides three functions to implement, encrypt(), decrypt() and queryAssistedEncrypt(). In encrypt() phase, users can set some variable, timestamp for example, and encrypt a combination of original data + variable. This method can make sure the encrypted masking data of the same original data are different, due to the existence of variables. In decrypt() phase, users can use variable data to decrypt according to the encryption algorithms set formerly.

Though this method can indeed increase data security, another problem can appear with it: as the same data is stored in the database in different content, users may not be able to find out all the same original data with equivalent query (SELECT FROM table WHERE encryptedColumnn = ?) according to this encryption column.Because of it, we have brought out assistant query column, which is generated by queryAssistedEncrypt(). Different from decrypt(), this method uses another way to encrypt the original data; but for the same original data, it can generate consistent encryption data. Users can store data processed by queryAssistedEncrypt() to assist the query of original data. So there may be one more assistant query column in the table.

queryAssistedEncrypt() and encrypt() can generate and store different encryption data; decrypt() is reversible and queryAssistedEncrypt() is irreversible. So when querying the original data, we will parse, rewrite and route SQL automatically. We will also use assistant query column to do WHERE queries and use decrypt() to decrypt encrypt() data and return them to users. All these can not be felt by users.

This article describes how to use Encrypt-JDBC, one of the ShardingSphere products, SpringBoot, SpringNameSpace are also could be the access form , etc. This form of access mainly focus to Java homogeneous, and is deployed together with business code In a production environment. For heterogeneous languages, ShardingSphere also provides Encrypt-Proxy client. Encrypt-Proxy is a server-side product that implements the binary protocol of MySQL and PostgreSQL. Users can independently deploy the Encrypt-Proxy service, User can access this virtual database server with encryption through third-party database management tools(e.g. Navicat), JAVA connection pool or the command line, just like access ordinary MySQL and PostgreSQL databases.