Sharding strategies can usually be set in the database or by users. Cases built in the database is relatively simple, and strategies can generally be divided into last number modulo, hash, range, tag, time and so on. More flexible, sharding strategies set by users can be customized according to their needs. Together with automatic data migration, database middle layer can automatically shard and balance the data without users paying attention to sharding strategies. The elastic migration ability of the distributed database can be achieved thereby. In the roadmap of ShardingSphere, elastic migration will start from 4.x version.

It is used in the situation to route according to the sharding key, and can be sub-divided into 3 types, direct route, standard route and Cartesian product route.

The conditions for direct route are relatively strict. It requires to shard through Hint (use HintAPI to appoint the route to databases and tables directly). On the premise of having database sharding but not table sharding, SQL parsing and the following result merging can be avoided. Therefore, with the highest compatibility, it can execute any SQL in complex situations including sub-queries, self-defined functions. Direct route can also be used in the situation where sharding keys are not in SQL.

Standard route is the most recommended sharding method by ShardingSphere, its application range is the SQL that does not include joint query or only includes joint query between binding tables. When the sharding operator is the equal mark, the route result will fall into single database (table); when sharding operators are BETWEEN or IN, the route result will not necessarily fall into the only database (table). So one logic SQL can finally be split into multiple real SQL to enforce. For example, if the data sharding is according to the odd number or even number, a single table query SQL is as the following:

The route result will be:

The complexity and performance of the joint query are comparable with those of single-table query. For instance, if a joint query SQL that contains binding tables is as this:

Then, the route result will be:

Cartesian product route has a relatively low performance, so it should be careful to use.

Broadcast schema route is used to deal with the operation for database, including the SET database management order used to set the database and transaction control statement as TCL.

Schema & table route is used to deal with all the operation of real tables related to its logic table, including mainly DQL and DML without sharding key and DDL, etc.

Instance broadcast route is used in DCL operation, whose authorization statement aims at database cases. No matter how many schemas are included in one case, each case can only be executed once.

Unicast route is used in the situation of acquiring the information of some certain physical table. It only requires to acquire data from any physical table in any database, for instance:

Ignore route is used to block the operation of SQL to the database, for instance:

Because ShardingSphere uses logic Schema, there is no need to send the database schema shift order to the database.

The overall structure division is as the following picture: 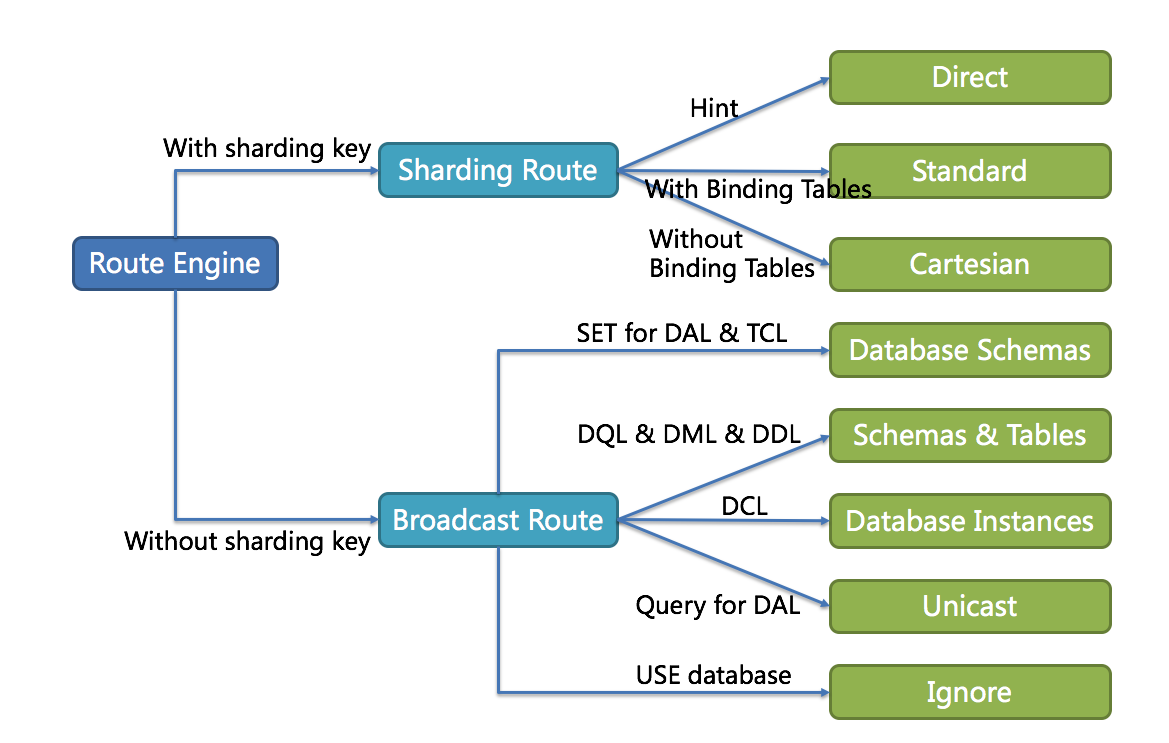