The SQL written by developers facing logic databases and logic tables cannot be executed directly in actual databases. The SQL rewrite is used to rewrite logic SQL into the rightly executable one in actual databases, including two parts, correctness rewrite and optimization rewrite.

In the situation that contains sharding tables, it requires to rewrite logic table names in sharding settings into actual table names acquired after routing. Database sharding does not require the rewrite of table names. In addition to that, there are also column addition, pagination information revision and other content.

Suppose the SQL is set with sharding key order_id, and its conditions will be routed to Sharding Table 1. Then, the SQL after rewriting should be:

The SQL above takes table name as the identifier of the field, so it should also be revised with SQL rewrite:

But if there is another name defined in SQL, it is not necessary to revise that, even though that name is the same as the table name. For example:

In ShardingSphere, schema management method is similar as that of the table. It uses logic schema to manage a set of data, so it requires to replace the logic schema written by users in SQL with physical database schema.

ShardingSphere still does not support the use of schema in DQL and DML statement, for example:

The derived column in query statements usually results from two situations. First, in result merging, ShardingSphere needs to acquire the corresponding data, but it is not returned through the query SQL. This kind of situation aims mainly at GROUP BY and ORDER BY. Result merging requires the sorting and ranking according to items of GROUP BY and ORDER BY field. But if the sorting and ranking items are not included in the original SQL, it should be rewritten. Look at the situation where the original SQL has the information required by result merging:

If the selected item does not contain the column required by result merging, it will need to add column, as the following SQL:

Since the original SQL does not contain user_id that result merging requires to acquire, the SQL needs to be rewritten by adding columns, and after that, it will be:

What’s to be mentioned, derived column will only add the missing column rather than all of them; the SQL that includes * in SELECT will also selectively add columns according to the meta-data information of tables. Here is a relatively complex SQL derived column case:

Suppose only the t_order_item table contains order_item_id column, according to the meta-data information of tables, the user_id in sorting item exists in table t_order as merging result, but order_item_id does not exist in t_order, so it needs to add columns. The SQL after that will be:

Another situation of derived column is using AVG aggregation function. In distributed situations, it is not right to calculate the average value with avg1 + avg2 + avg3 / 3, and it should be written as (sum1 + sum2 + sum3) / (count1 + count2 + count3). This requires to rewrite the SQL that contains AVG as SUM and COUNT and recalculate the average value in result merging. Such as the following SQL:

Then it can calculate the right average value through result merging.

Rewritten SQL will add auto-increment key name and its value generated automatically in the last part of INSERT FIELD and INSERT VALUE. xxxxx in the SQL above stands for the latter one. If INSERT SQL does not contain the column name of the table, ShardingSphere can also automatically generate auto-increment key by comparing the number of parameter and column in the table meta-information. For example, the original SQL is:

The rewritten SQL only needs to add an auto-increment key in the column where the primary key lays:

In auto-increment key derived column, if the user writes SQL with the method of placeholder, he only needs to rewrite parameter list but not SQL itself.

Acquiring pagination data from multiple databases is different from the situation of a single database. Suppose every 10 pieces of data are divided to be one page, it is not right to take the second page of data, acquire LIMIT 10, 10 under sharding situations, and take out the first 10 pieces of data according to sorting conditions after merging. For example, if the SQL is:

The following picture shows the execution of pagination results without SQL rewrite. 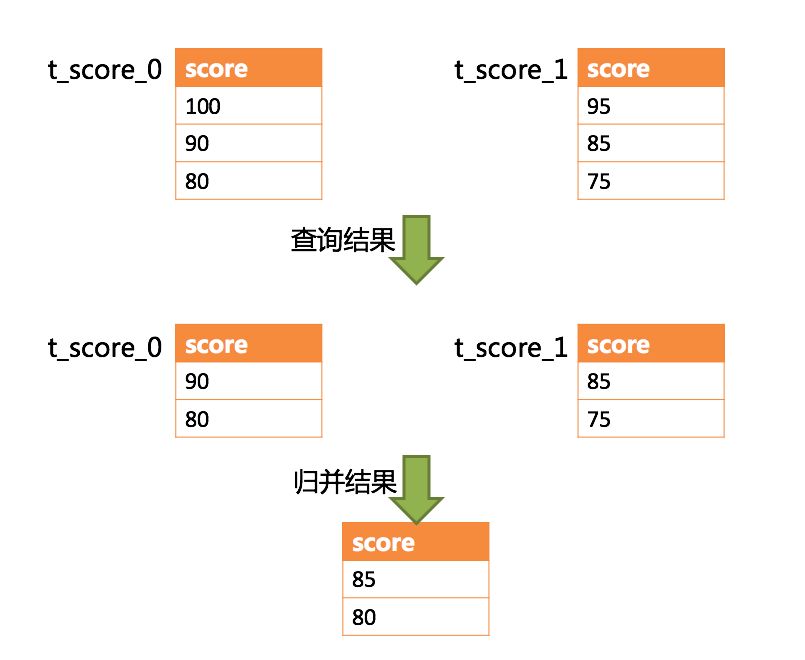 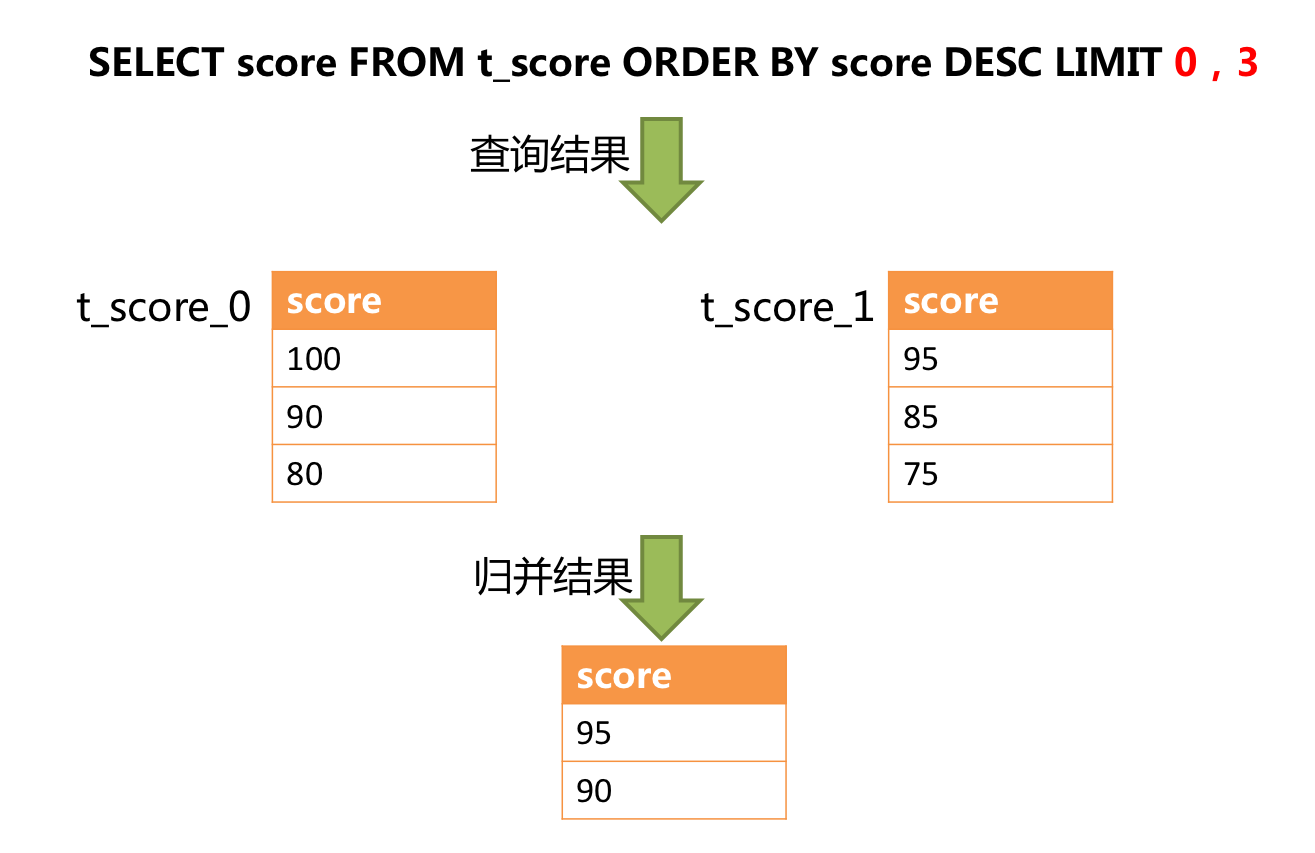 When using SQL inserted in batch, if the inserted data crosses sharding, the user needs to rewrite SQL to avoid writing excessive data into the database. The differences between insert operation and query operation are: though sharding keys that do not exist in current sharding are used in the query sentence, it will not have any influence on data; insert operation has to delete extra sharding keys. Take the following SQL for example:

Suppose the database is divided into two parts according to odd or even number, execute this SQL after revising the table name only, and then both of the two shards will be written with the same record.

Though only the data that confirms to sharding conditions can be taken out from query statement, the realization schema with excessive data is not reasonable.

So SQL should be rewritten as:

IN query is similar as batch insertion, but IN operation will not lead to wrong data query result. Through rewriting IN query, the query performance can be further improved. Like the following SQL:

Its purpose is an effective method to improve the performance without influencing the correctness of the query.

It only adds ORDER BY as well as sorting items and sorting order which are the same as grouping items, to the SQL that contains GROUP BY, and they are used to transfer memory merging to stream merging. In the result merging part, stream merging and memory merging will be explained in detail.

The overall structure division of rewrite engine is shown in the following picture. 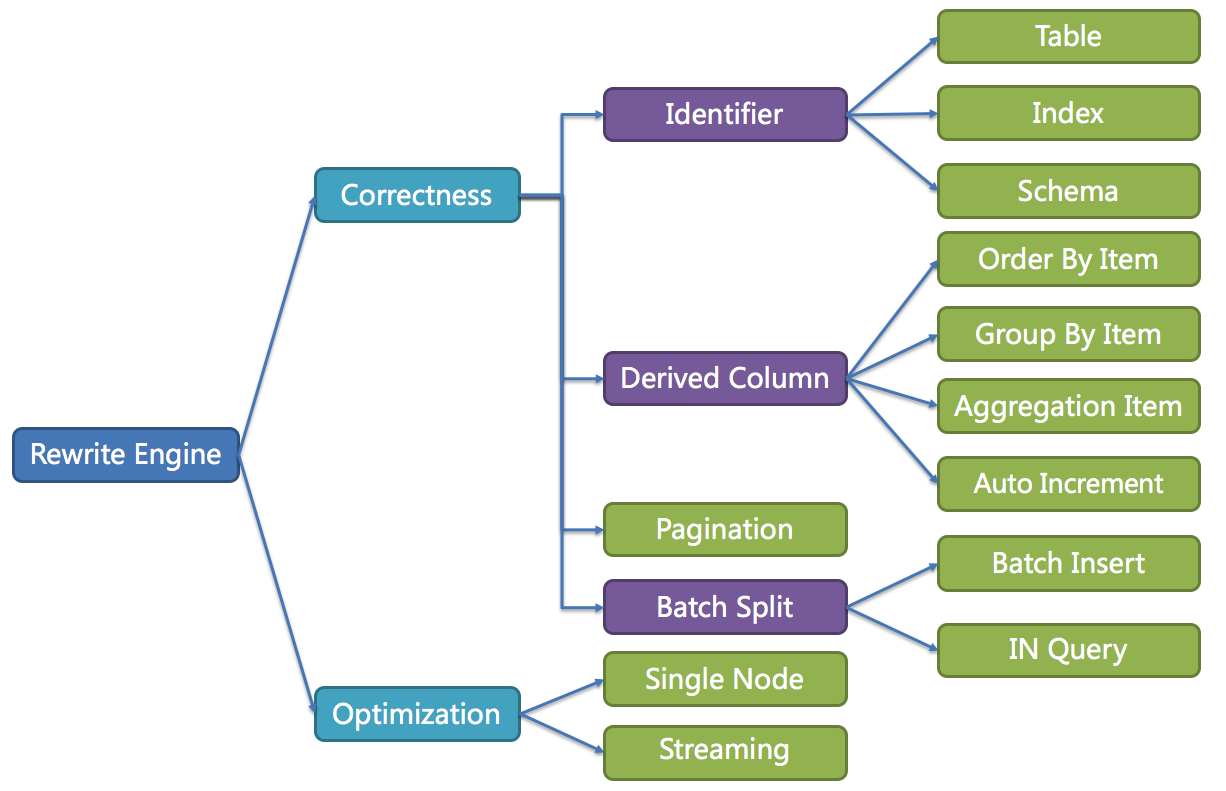