When a user queries data, it only retrieves ciphertext data from the database, decrypts it, and finally returns the decrypted source data to the user. Apache ShardingSphere achieves a transparent and automatic data encryption process. Users can use encrypted data as normal data without paying attention to the implementation details of data encryption. 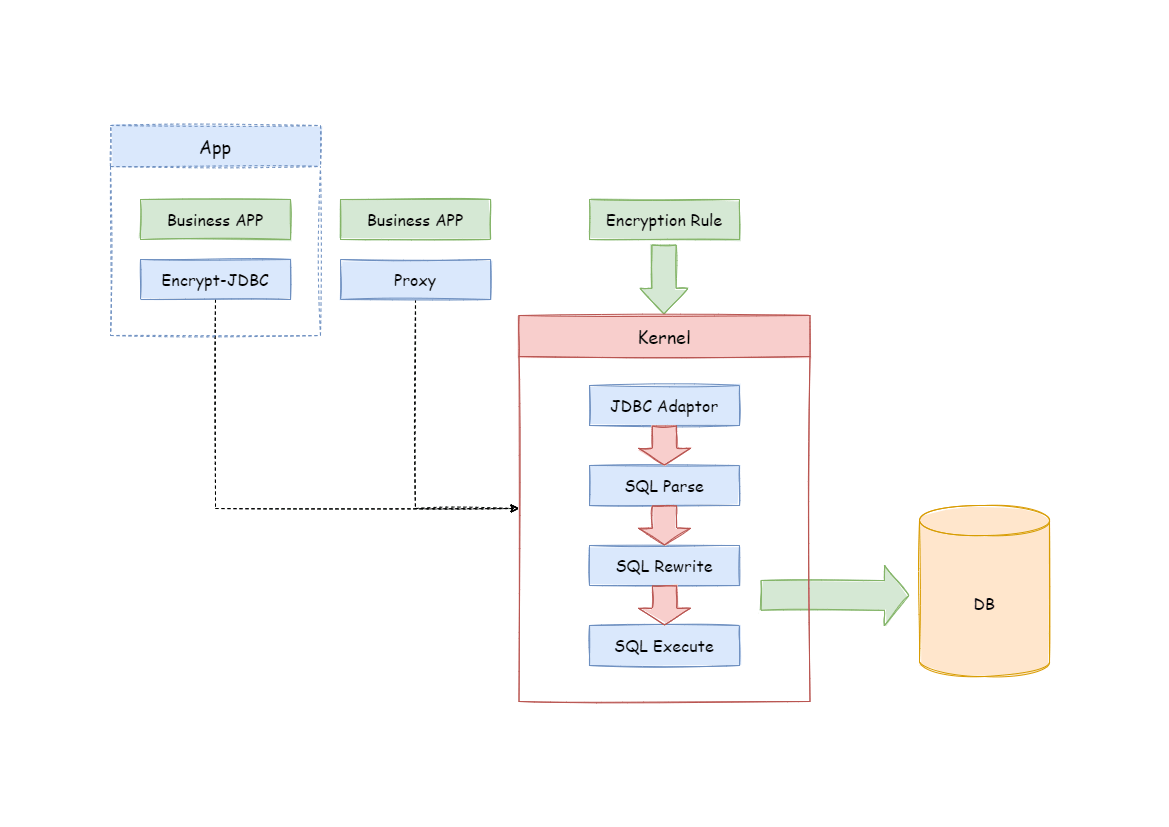 Apache ShardingSphere will encrypt the plaintext requested by users and store it in the underlying database. When the user queries, the ciphertext is extracted from the database, decrypted, and returned to the terminal user. By shielding the data encryption process, users do not need to operate the SQL parsing process, data encryption, and data decryption. 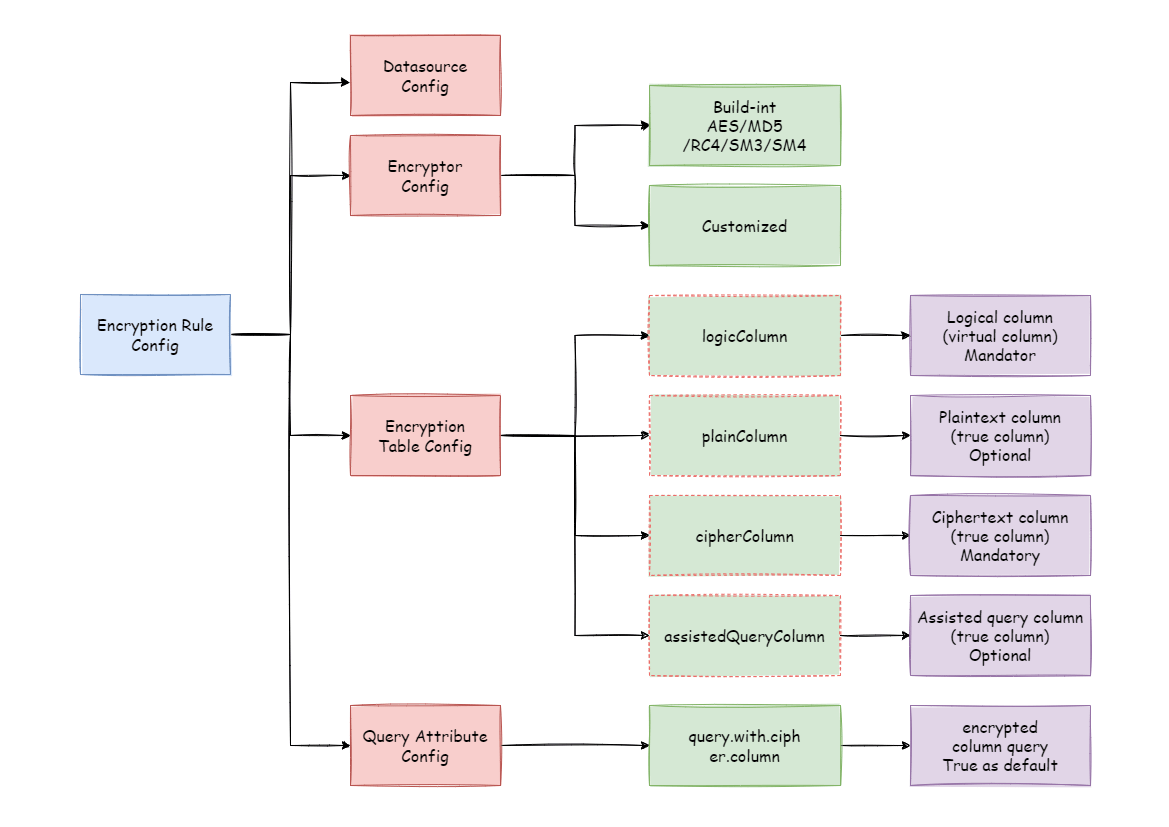 What does it mean by “which column the user would like to use for SQL writing (logicColumn)"? We have to know first why the encrypted module exists. The goal of the encrypted module is to shield the underlying data encryption process, which means we don’t want users to know how data is encrypted and decrypted, and how to store plaintext data into plainColumn and ciphertext data into cipherColumn. In other words, we don’t want users to know there is a plainColumn and cipherColumn or how they are used. Therefore, we need to provide the user with a conceptual column that can be separated from the real column in the underlying database. It may or may not be a real column in the database table so that users can change the column names of plainColumn and cipherColumn of the underlying database at will. Or we can delete plainColumn and never store plaintext, only ciphertext. The only thing we have to ensure is that the user’s SQL is written towards the logical column, and the correct mapping relation between logicColumn, plainColumn, and cipherColumn can be seen in the encryption rules.

For example, if there is a table named t_user in the database, and they’re two fields in the table: pwd_plain for storing plaintext data and pwd_cipher for storing ciphertext data, and logicColumn is defined as pwd, then users should write SQL for logicColumn, that is INSERT INTO t_user SET pwd = '123'. Apache ShardingSphere receives the SQL and finds that the pwd is the logicColumn based on the encryption configuration provided by the user. Therefore, it encrypts the logical column and its corresponding plaintext data.

Apache ShardingSphere transforms the column names and data encryption mapping between the logical columns facing users and the plain and cipher columns facing the underlying database. As shown in the figure below: 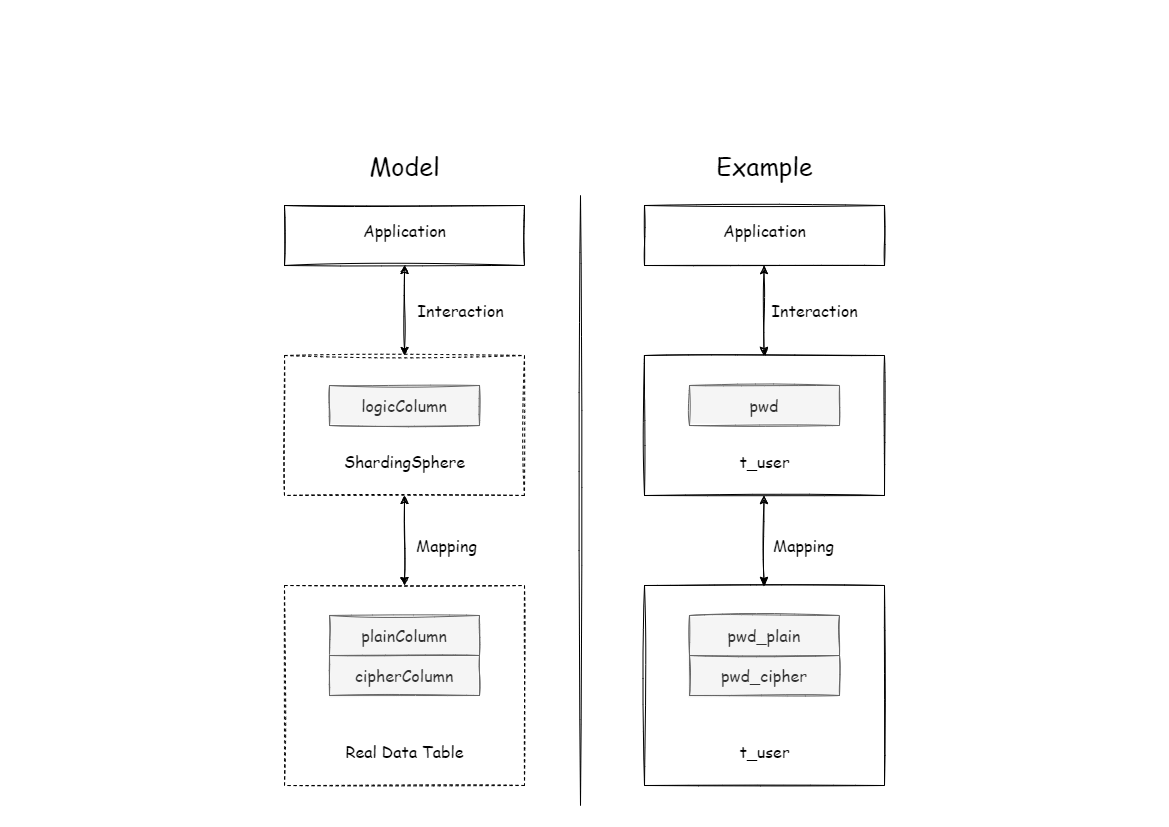 The connection, mapping, and transformation between the user and the underlying database are handled by Apache ShardingSphere.

The picture below shows the processing flow and conversion logic when the encryption module is used to add, delete, change and check, as shown in the figure below. 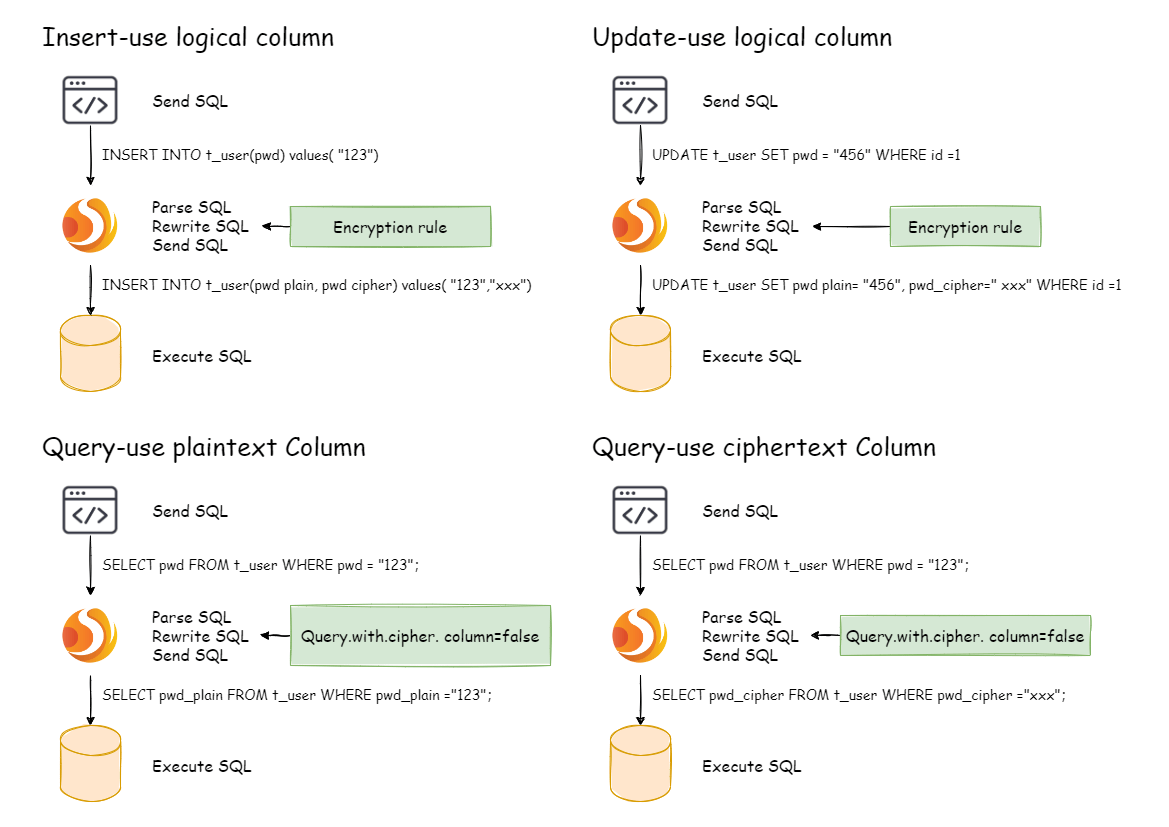 Business scenario analysis: the newly launched business is relatively simple because it starts from scratch and there’s no need to clean up historical data.

The underlying data table does not store plaintext, and only ciphertext is stored, which is also the requirement of the security audit. If you want to store both plaintext and ciphertext in the database, add the plainColumn configuration. The overall processing flow is shown in the figure below: 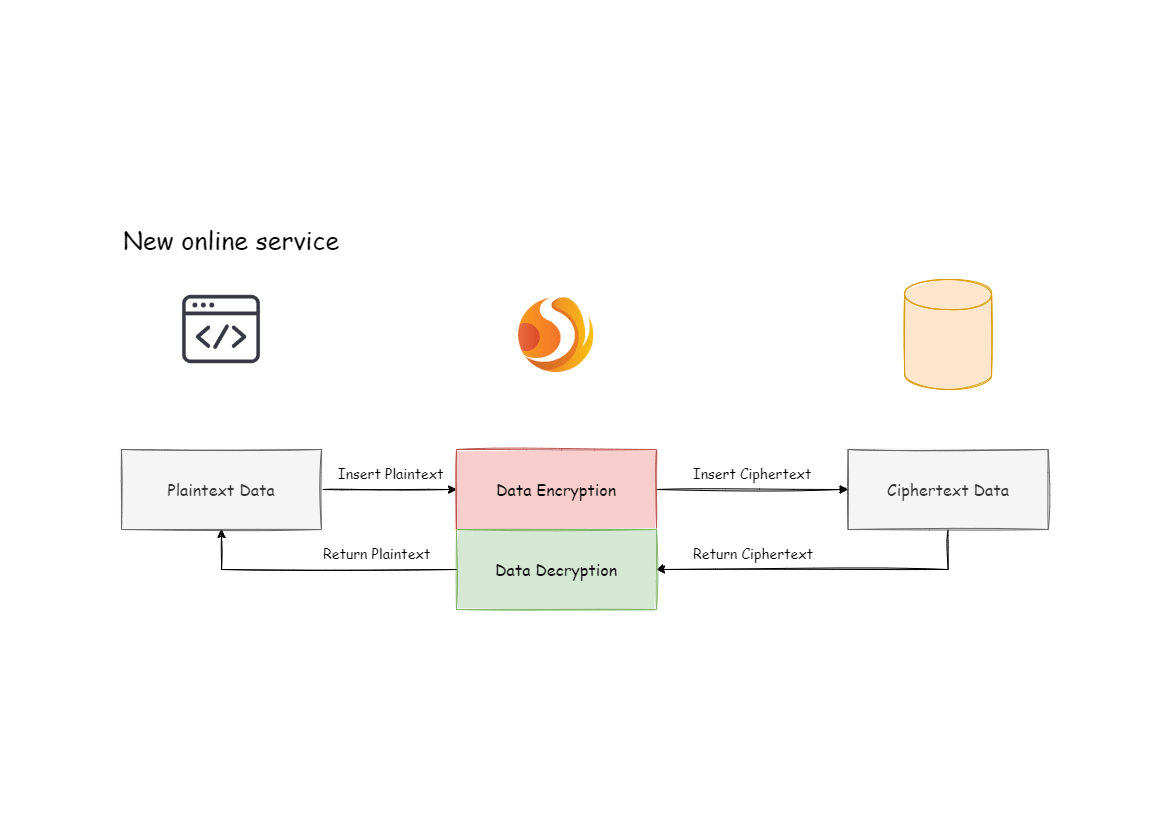 Solution Description: before coming up with a solution, let’s brainstorm.

First, since it is an old business that needs to be encrypted and transformed, it must have stored very important and sensitive information, which is valuable and related to critical businesses. Therefore, it is impossible to suspend business immediately, prohibit writing new data, encrypt and clean all historical data with an encryption algorithm. And then deploy and launch the reconstructed code to encrypt and decrypt the stock and incremental data online. Such a complex solution will definitely not work.

The most popular solutions for developers are to reduce the capital cost, not change the business code, and be able to migrate the system safely and smoothly. Thus, the encryption function module of ShardingSphere was created. It can be divided into three steps:

Assuming that the system needs to encrypt the pwd field of t_user, the business side uses Apache ShardingSphere to replace the standardized JDBC interface, which basically requires no additional modification (we also provide Spring Boot Starter, Spring Namespace, YAML and other access methods to meet different business requirements). In addition, we would like to demonstrate a set of encryption configuration rules, as follows:

According to the above encryption rules, we need to add a field called pwd_cipher, namely cipherColumn, in the t_user table, which is used to store ciphertext data.

At the same time, we set plainColumn to pwd, which is used to store plaintext data, and logicColumn is also set to pwd.

Because the previous SQL was written using pwd, the SQL was written for logical columns, and the business code does not need to be changed. Through Apache ShardingSphere, for the incremental data, the plaintext will be written to the pwd column and be encrypted and stored in the pwd_cipher column.

At this time, because queryWithCipherColumn is set to false, for business applications, the plaintext column of pwd is still used for query and storage, but the ciphertext data of the new data is additionally stored on the underlying database table pwd_cipher. The processing flow is shown below: 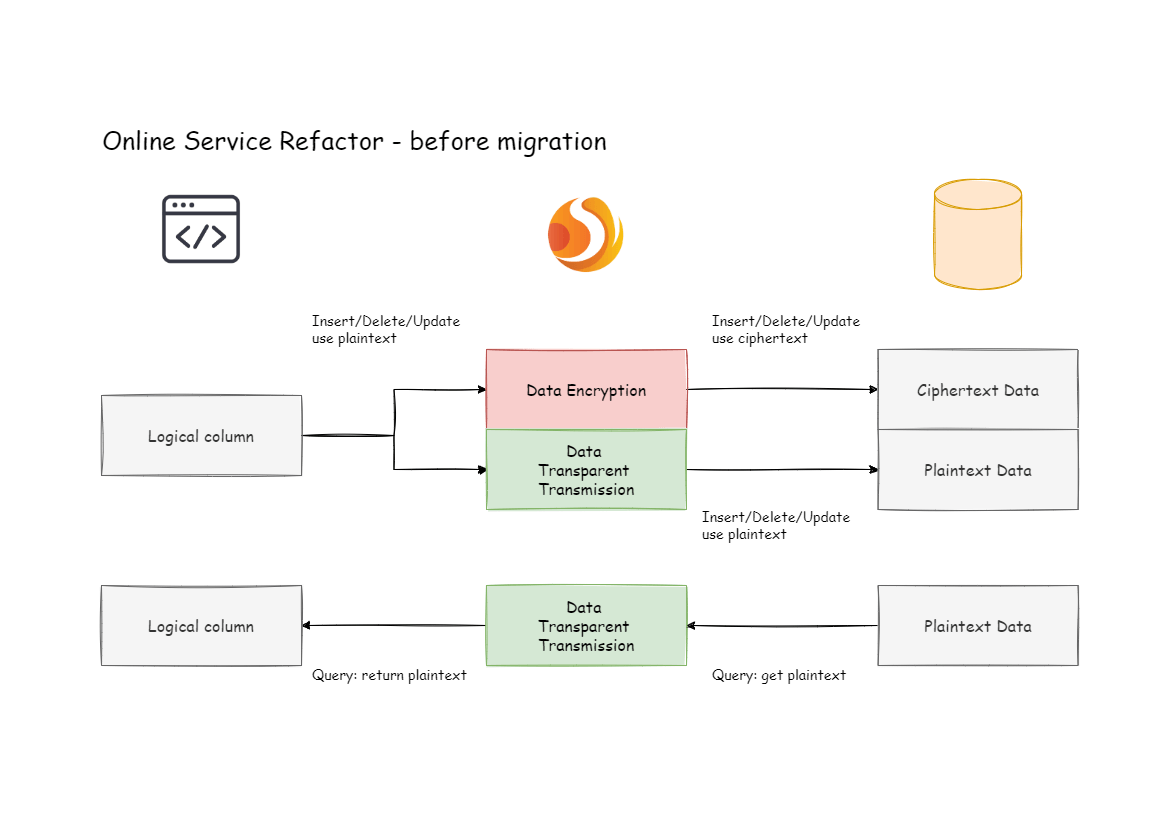 When the new data is inserted, it is encrypted as ciphertext data by Apache ShardingSphere and stored in the cipherColumn. Now you need to deal with the historical plaintext stock data. Apache ShardingSphere currently does not provide a migration and data cleansing tool, so you need to encrypt the plaintext data in the pwd and store it in the pwd_cipher.

After restarting the system, we found that all system businesses are normal, but Apache ShardingSphere has started to take out and decrypt the cipherColumn data from the database and returned those data to the user. In terms of users’ requirements of addition, deletion and modification, the original data is still stored in the plainColumn, and the encrypted ciphertext data is stored in the cipherColumn.

Although the business system has taken out the data in the cipherColumn and returned it after decryption, it will still save a copy of the original data to the plainColumn. Why? The answer is: to enable system rollback.

Because as long as the ciphertext and plaintext always exist at the same time, we can freely switch the business query to cipherColumn or plainColumn through the configuration of the switch item.

In other words, if the system is switched to the ciphertext column for query, the system reports an error and needs to be rolled back. Then we only need to set queryWithCipherColumn = false, and Apache ShardingSphere will restore and start using plainColumn to query again. The processing flow is shown in the following figure: 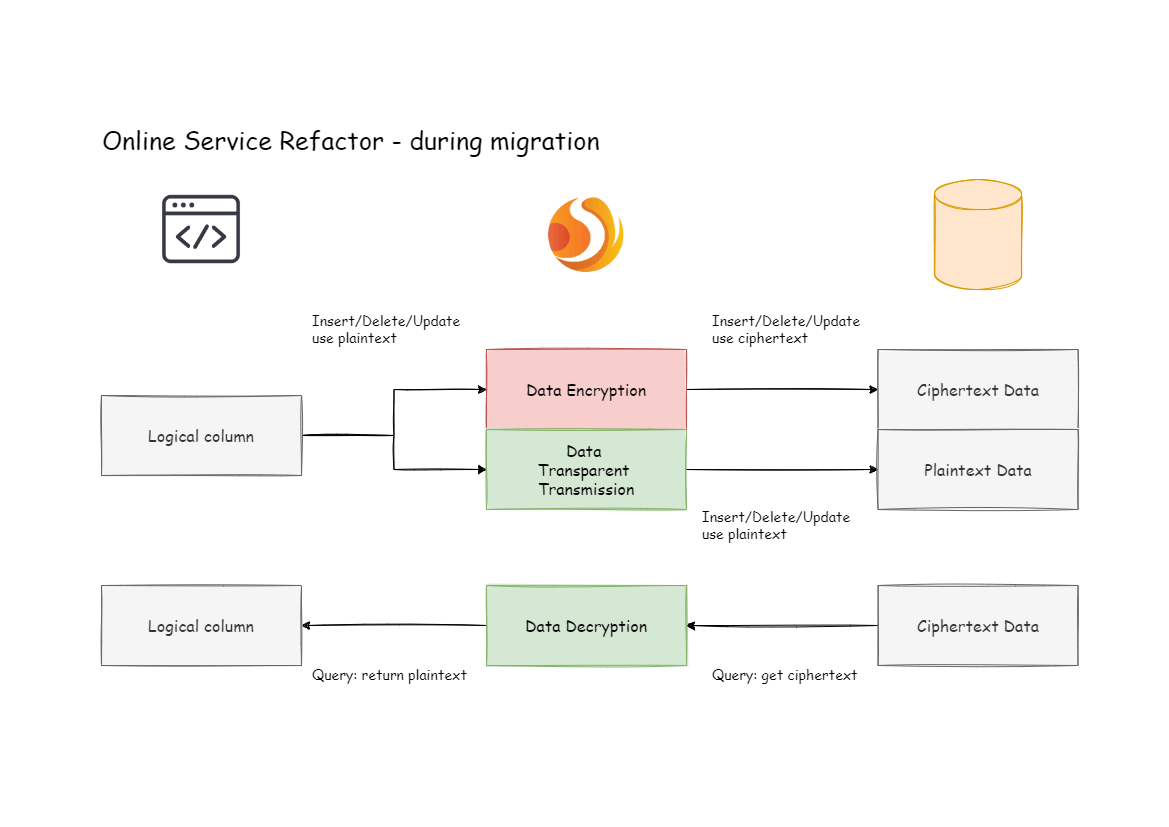 That is, we need to delete plainColumn (i.e.pwd) after system migration. The problem is that now the business code is written for pwd SQL, and we delete the pwd that stores plaintext in the underlying data table and use the pwd_cipher to decrypt the original data.

Does that mean that the business side needs to change all SQL, to not use the pwd column to be deleted? No. Remember the core concept of Apache ShardingSphere?

That is exactly the core concept of Apache ShardingSphere’s encryption module. According to the encryption rules provided by the user, the user SQL is separated from the underlying database table structure, so that the user’s SQL writing no longer depends on the actual database table structure. The connection, mapping, and conversion between the user and the underlying database are handled by ShardingSphere.

The existence of the logicColumn means that users write SQL for this virtual column. Apache ShardingSphere can map this logical column and the ciphertext column in the underlying data table. So the encryption configuration after the migration is: 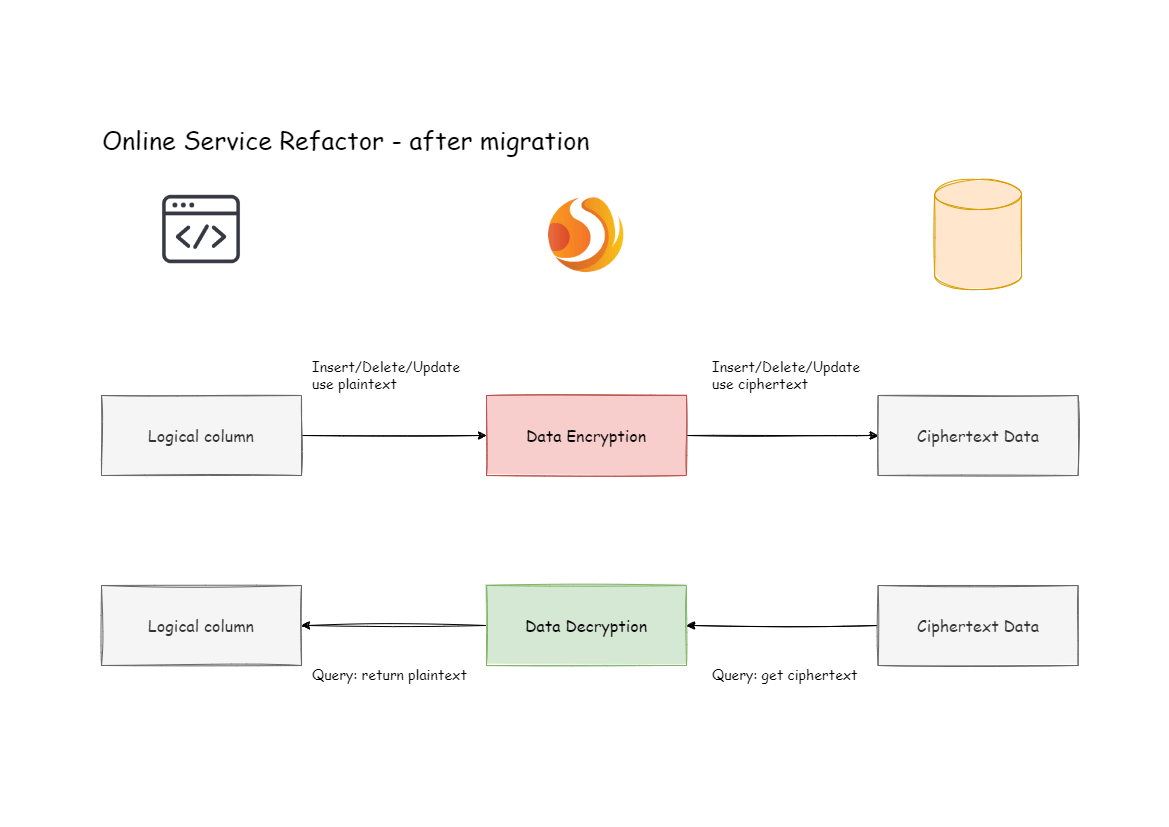 As required by security audit teams, the business system needs to periodically trigger key modifications or through some emergency events. We need to perform migration data cleansing again, which means using the old key to decrypt and then use the new key to encrypt.

The problem persists. The plaintext column data has been deleted, and the amount of data in the database table is tens of millions. Additionally, the migration and cleansing take a certain amount of time, during which the cipher column changes.

So far, the encryption rectification solution for the released business has been completely demonstrated. We provide Java, YAML, Spring Boot Starter, and Spring namespace for users to choose and access to meet different business requirements. This solution has been continuously verified by enterprise users such as JD Technology.

On the one hand, Apache ShardingSphere provides users with built-in implementation classes for encryption and decryption, which are available through configurations by users.

On the other hand, in order to be applicable to different scenarios, we also opened the encryption and decryption interfaces, and users can provide specific implementation classes according to these two types of interfaces.

The solution provides two methods, encrypt() and decrypt(), to encrypt or decrypt data. When users perform INSERT, DELETE and UPDATE operations, ShardingSphere will parse, rewrite and route SQL according to the configuration.

It will also use encrypt() to encrypt data and store them in the database. When using SELECT, they will decrypt sensitive data from the database with decrypt() and finally return the original data to users.