After years of stagnation, ElasticJob is back with the first Apache version 3.0.0-alpha · ShardingSphere - Blog

After years of stagnation, ElasticJob is back with the first Apache version 3.0.0-alpha

After years of stagnation, ElasticJob is back with the first Apache version 3.0.0-alpha

Within a few months ElasticJob as the subproject of Apache ShardingSphere has fixed and merged 535 issues and pull requests. More importantly, the ElasticJob community released the first official version: 3.0.0-alpha after joined Apache Software Foundation.

ElasticJob (https://github.com/apache/shardingsphere-elasticjob) is a distributed scheduling solution for internet ecology and massive tasks. ElasticJob consisting of two separate subprojects, ElasticJob-Lite and ElasticJob-Cloud. It was born in 2015, at that time the industry had outstanding job scheduling library such as QuartZ, but lacked of exploration at distributed field. The lack of distributed scheduling cloud platform products has caused ElasticJob to attract attention from the beginning. It effectively makes up for the shortcomings of operations in the distributed field, and provides a one-stop automated operation and maintenance management and control terminal. Each product uses a unified operation API. Developers only need to develop once and deploy at will.

In the technology selection for ElasticJob, it chose to stand on the shoulders of giants instead of reinvent the wheel. It perfectly combines the standard job scheduling library QuartZ, and ZooKeeper, a weapon for distributed coordination, to quickly and stably build a new concept of distributed scheduling framework.

ElasticJob-Lite is a thread-level scheduling framework for in-process. It can be used in conjunction with Java frameworks such as Spring, Dubbo and Spring-injected Beans can be used freely in operations, such as data source connection pools, Dubbo remote services, etc. It fits business developement well and make development more conveniently.

ElasticJob-Lite itself is a non-centralized architecture and does not require an independent centralized scheduling node. Each task node under the distributed system is a self-scheduled scheduling job in a timely manner. Only one registry is needed between tasks to coordinate task status in distributed scenarios, ZooKeeper is supported as a registry currently.

The architecture diagram is shown below: It can be seen from the figure that the distributed job node of ElasticJob-Lite obtains the master node through election, and shards through the master node. After the fragmentation is completed, the master node and the replica node are the same, and both execute tasks in a self-scheduled manner.

ElasticJob-Cloud has two methods: in-process scheduling and process-level scheduling. Since ElasticJob-Cloud can control the resources of the job server, its job types can be divided into permanent tasks and transient tasks. Resident tasks like ElasticJob-Lite, which is in-process scheduling has completely different instantaneous tasks. It makes full use of the peak-clipping and valley-filling capabilities of resource allocation. It is process-level scheduling, each task starts a new process.

ElasticJob-Cloud needs to control resources through Mesos, and allocate tasks and resources through the scheduler deployed in Mesos Master. Cloud adopts a centralized architecture to transfer the high availability of the dispatch center to Mesos.

Its architecture diagram is shown below: 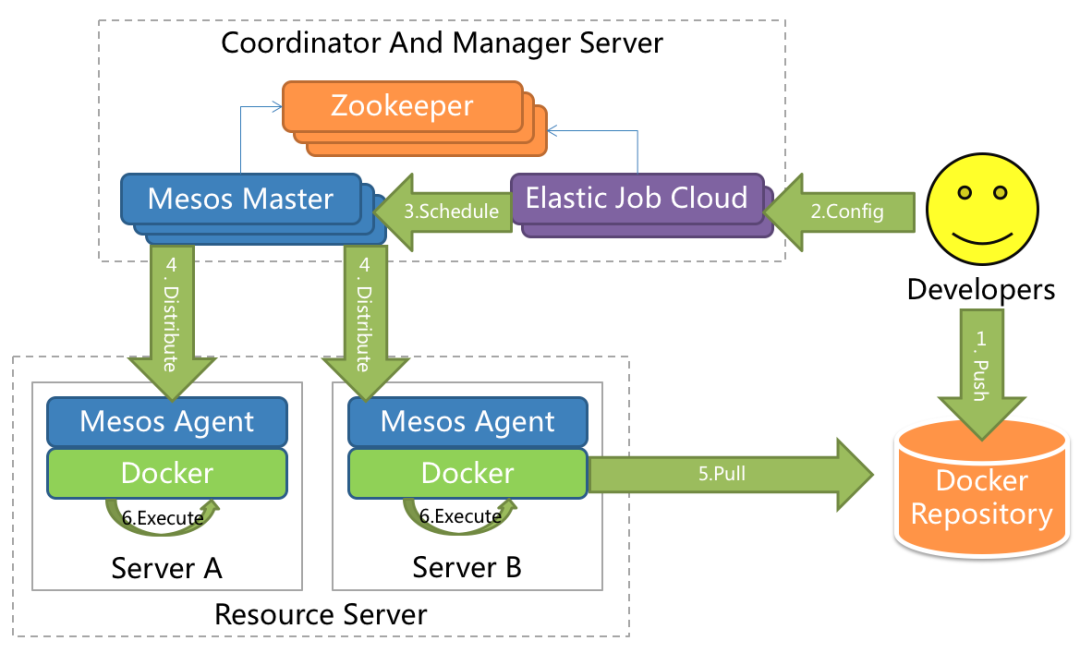 It can be seen from the figure that ElasticJob-Cloud not only has all the capabilities of Lite, but also has the ability to allocate resources and distribute tasks. It fully manages a series of life cycles of job development, packaging, distribution, scheduling, governance, and sharding. It is a true job cloud scheduling system.

Compared with the simplicity and ease of use of ElasticJob-Lite, ElasticJob-Cloud’s strong dependence on Mesos increases the complexity of system deployment, making it more suitable for large-scale operating systems.

Elastic scheduling is the most important function of ElasticJob, and it is also the origin of the product name. It is a task processing system that allows tasks to be scaled horizontally through sharding.

The concept of task sharding items in ElasticJob enables tasks to run in a distributed environment, and each task server only runs the shards assigned to that server. With the increase or downtime of servers, ElasticJob will sense the changes in the number of servers in near real-time, thus it could re-allocate more reasonable task fragmentation items for distributed task servers, so that tasks can increase efficiency as resources increase.

Scheduling refers to assigning suitable resources to tasks at suitable times and making them effective. ElasticJob has the ability to allocate resources, it can schedule tasks like a distributed operating system. Resource allocation is realized by Mesos. Mesos is responsible for allocating the required resources (CPU and memory) declared by the task and isolating the allocated resources. ElasticJob will execute the task after obtaining the resource.

Considering the relatively complex deployment of the Mesos system, ElasticJob split this part into the ElasticJob cloud for advanced users. With the strong development of Kubernetes, ElasticJob will also complete the connection of the Cloud part with it in the future.

Governance and coordination of high availability, failover, and re-execution of missed jobs in distributed scenarios.

It can be seen from the Release Notes that ElasticJob 3.x is not a patched version of 2.x, but a set of new products implemented through innovative design concepts.

The most intuitive change in ElasticJob 3.x is to split the original single-digit number of modules into dozens of micro-modules with responsibilities for cleaning up.

The keywords of the new version are microkernel, scalability and ecological docking.

The height of kernel module is extensible, but does not rely on the implementation of the extensible module itself. It inherits the previous capabilities of ElasticJob, while continuing to provide developers with a toolkit of distributed services, while opening up a scaffolding that can be freely customized and extended to developers.

Developers can weave customized functions without modifying the ElasticJob source code, which is truly closed for modification and open for extension.

ElasticJob 3.x provides the official Spring Boot Starter, and has started to develop automatic probes based on Apache SkyWalking, making it more convenient to integrate into the existing technology system.

In addition, what can be read from the Release Notes is that ElasticJob 3.x has not significantly updated Cloud, and its main changes are concentrated in the kernel and Lite modules.

For Mesos, which is complex to deploy, it is no longer popular. ElasticJob 3.x will gradually weaken its dependence on it, and plans to provide more generalized resource isolation APIs in the future, so that the Cloud product line can be connected to Mesos, Kubernetes, and even independent independent Deployment and use.

After adjusting the project and package structure, ElasticJob 3.0.0-beta will focus on the development of new functions and standardization of operational APIs.

In the future, ElasticJob will keep moving forward. The main plans are as follows:

To be a Cloud management products that are easier to use

In the same vein as Apache ShardingSphere, ElasticJob will also provide a more pluggable and modular architecture to provide developers with infrastructure. It is convenient for developers to develop secondary development based on ElasticJob and add various customized functions, including but not limited to job types (such as big data jobs, HTTP jobs, etc.), registry types (such as Eureka, etc.), execution track storage media (such as Other database types) etc.

ElasticJob will eventually make Lite and Cloud available to development engineers and operation and maintenance engineers in a closer way, sharing their scheduling, execution, and job libraries. The overall plan is as follows: 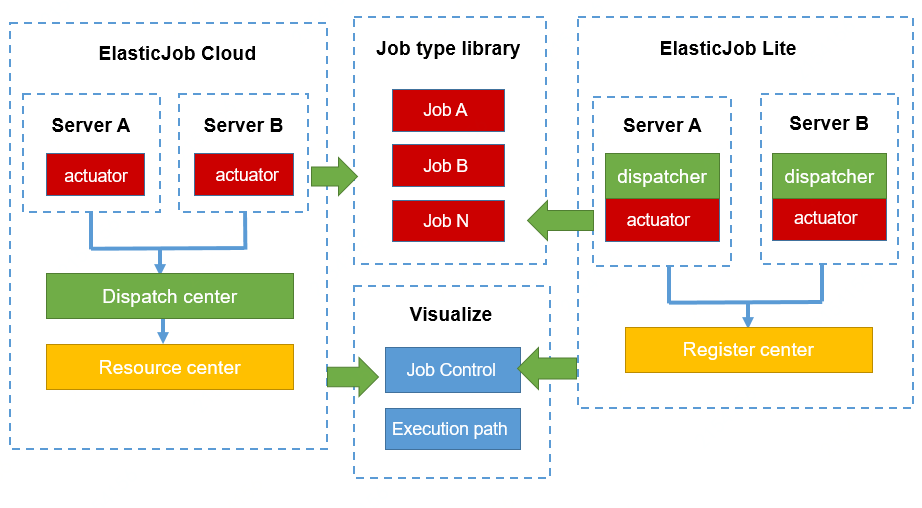 The ElasticJob community has stagnated in the previous few years, mainly because the author’s personal energy is limited and snowed under with work. After receiving the demand for the scheduling infrastructure for the flexible migration of Apache ShardingSphere, the ElasticJob community decided to restart and continued to shine as a sub-project of Apache ShardingSphere. The current ElasticJob has officially moved the project source code into Apache’s GitHub repository, and has been very active in the months since the restart, and is on the GitHub weekly and monthly trend rankings.

At present, the main energy is devoted to building the distributed database middleware Apache ShardingSphere into the industry’s first-class financial-grade data solution.