TC is an independent service and needs to be deployed separately, but TM and RM are deployed together with business applications in the form of a jar package, they establish a long-term connection with the TC and maintain RPC communication in the whole transaction life cycle. SPI the distributed transaction of ShardingSphere 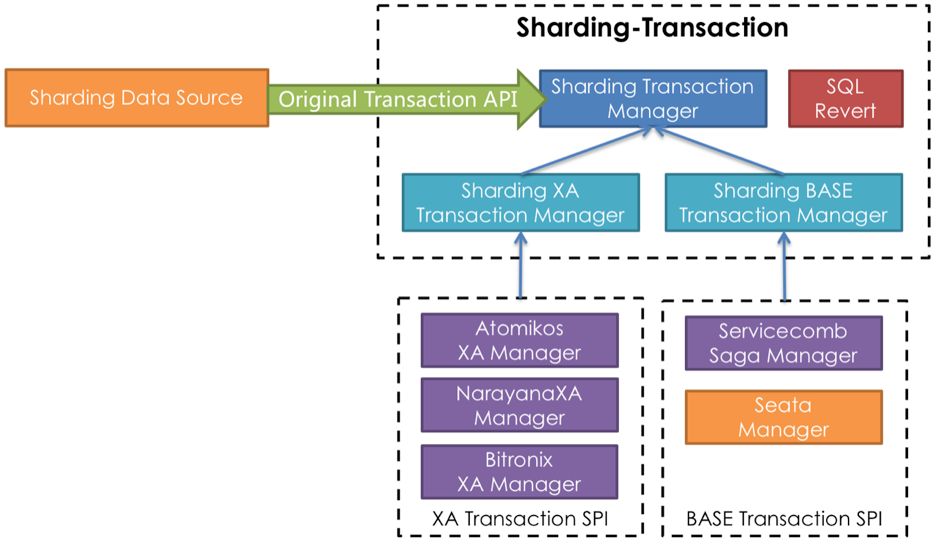 For 2PC XA transaction, we have integrated Atomikos, Narayana, Bitronix transaction mangers. The bottom layer of XA transaction depends on the support of specific database vendors for the 2PC XA commit protocol, usually XA protocol doing 2PL (2 phase Lock) throughout Prepare and Commit which guarantees the ACID of distributed transactions. This usually suitable for short transaction and non-cloud environments (cloud environment takes around 20ms to do next IO, 2PL will lock resources up to 40ms, so the TPS of transaction will goes down to 25/s, non-cloud environment usually only takes a few milliseconds per IO, therefore the time to lock data is relatively low) [1].

In terms of BASE transactions, we have now completed the integration of ServiceComb Saga. Saga has improved the performance of the overall transaction through one-phase commit plus compensation. The compensation method is roughly the same as Seata, that is, the physical SQL after fragmentation Revert is used to generate compensated SQL, but the Saga model does not support isolation levels in theory, and is suitable for businesses with high performance requirements and low consistency requirements. On the basis of one-phase commit plus compensation, Seata AT transaction supports the RC isolation level through the global lock of TC, which is another implementation between XA and Saga. In terms of flexible news affairs, you are also welcome to refer to our SPI to provide integrated solutions.

Items to be optimized

When the Seata AT transaction is Revert SQL, we need to parse the physical SQL twice after the ShardingSphere fragmentation, so we need to design an SPI to avoid the loss of the performance in the second SQL parsing.

[1]: Transactions for Distributed Actors in the Cloud