How to construct the distributed database · ShardingSphere - Blog

How to construct the distributed database

Relational databases have dominated the database field for the past few decades, and the stability, security, and ease of use they bring have become the cornerstone for building modern systems. With the rapid development of the Internet, the database structured in a stand-alone system has been unable to meet the increasingly high concurrent requests and increasingly large data storage needs, therefore, distributed database are more widely adopted.

Historically, the database space has been dominated by Western technology companies and communities. Apache ShardingSphere is one of these distributed database solutions and is currently the only database middleware in the Apache Software Foundation.

Fully compatible with SQL and transactions for traditional relational databases, and naturally friendly to distribution, is the design goal of distributed database solutions. Its core functions are mainly concentrated in the following points:

Apache ShardingSphere is an open source ecosystem distributed database solutions, consisting of three separate products, Sharding-JDBC, Sharding-Proxy, and Sharding-Sidecar (planned). They all provide functions of data scale out, distributed transaction and distributed governance for a variety of diverse application scenarios such as Java Isomorphic, heterogeneous languages, and cloud-native. As Apache ShardingSphere continues to explore query optimizers and distributed transaction engines, it has gradually broken the product boundaries of implementations and evolved into a platform-level solution that is both aggressive and stable all in one.

Defines itself as a lightweight Java framework that provides extra service at Java JDBC layer. With the client end connecting directly to the database, it provides service in the form of jar and requires no extra deployment and dependence. It can be considered as an enhanced JDBC driver, which is fully compatible with JDBC and all kinds of ORM frameworks. 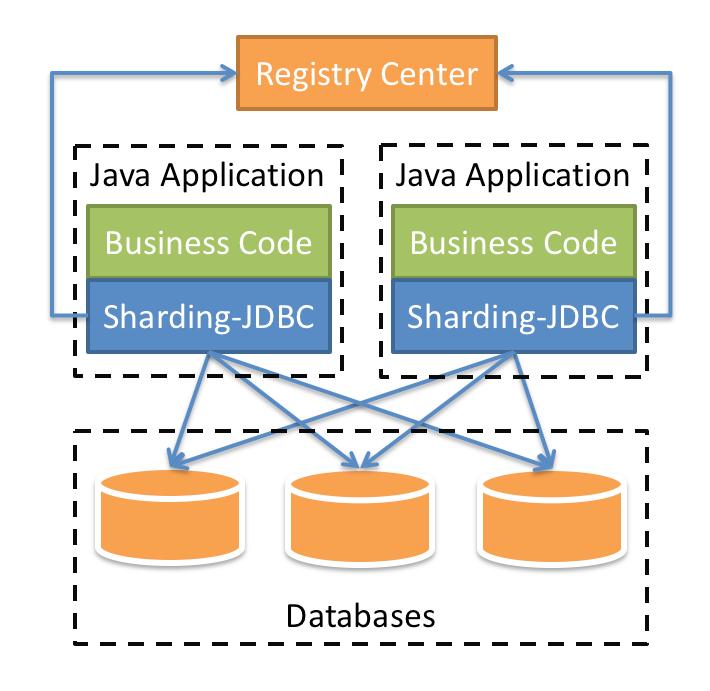 Defines itself as a transparent database proxy, providing a database server that encapsulates database binary protocol to support heterogeneous languages. Friendlier to DBA, the MySQL/PostgreSQL version provided now can use any kind of client access (such as MySQL Command Client, MySQL Workbench, Navicat etc.) that is compatible of MySQL/PostgreSQL protocol to operate data. 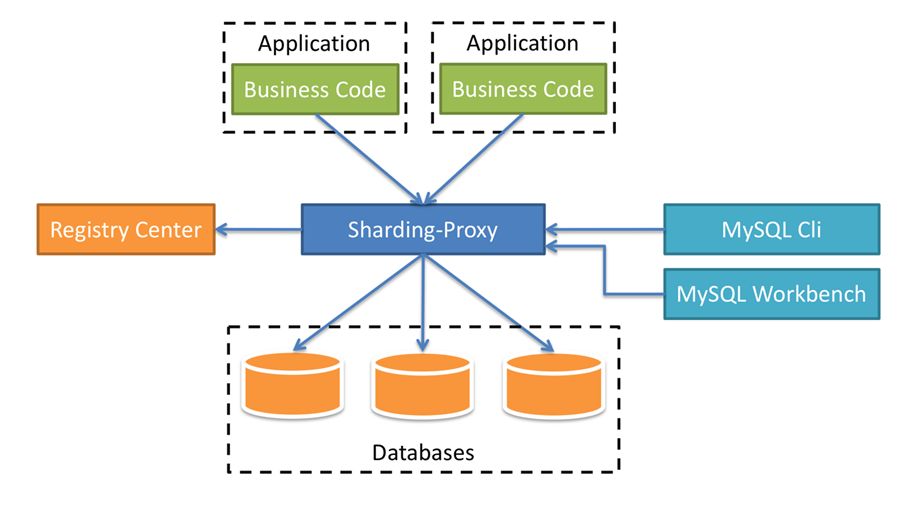 Defines itself as a cloud native database agent of the Kubernetes environment, in charge of all the access to the database in the form of sidecar. It provides a mesh layer interacting with the database, we call this as Database Mesh. 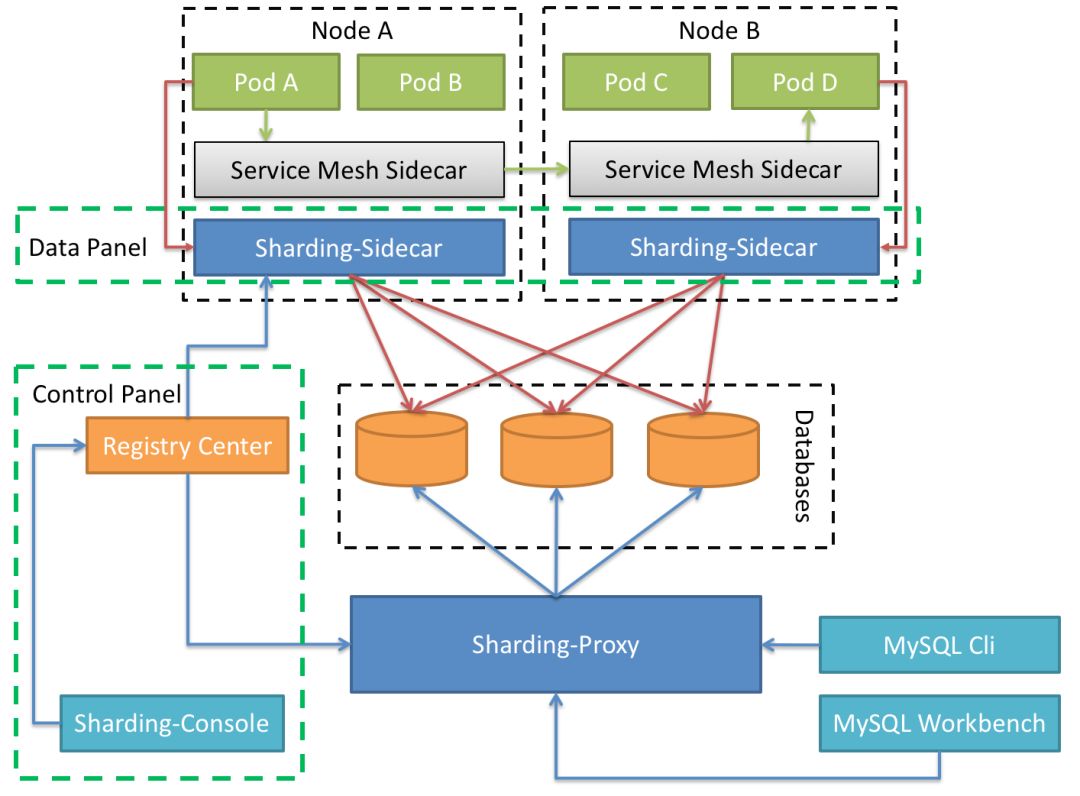 Apache ShardingSphere is an ecosystem composed of multiple access points. By mixing Sharding-JDBC and Sharding-Proxy, and using the same configuration center to configure the sharding strategy uniformly, it is possible to flexibly build application systems suitable for various scenarios, allowing architects to freely adjust the best system suitable for the current business Architecture. 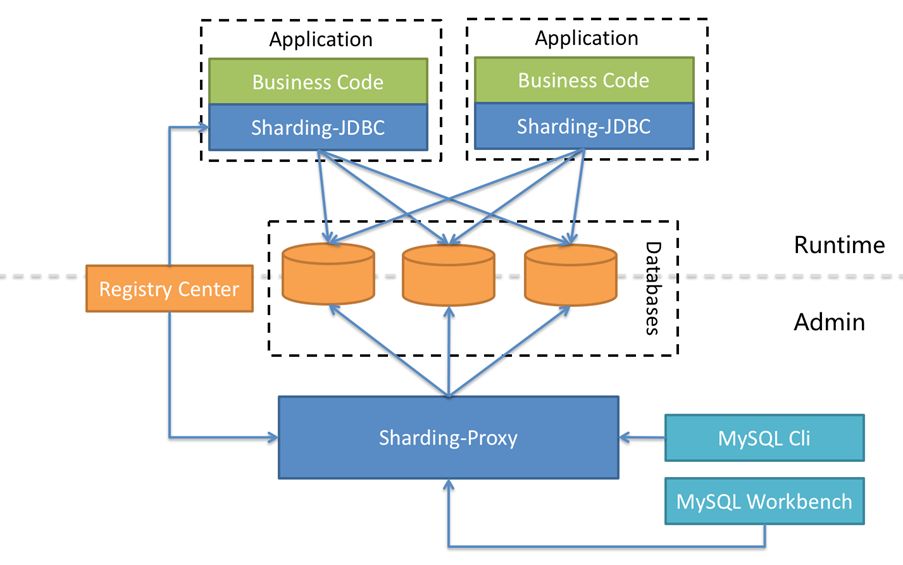 It can automatically route SQL to the corresponding data node according to the user’s configured sharding algorithm to achieve the purpose of operating multiple databases. Users can use multiple databases managed by Apache ShardingSphere like a stand-alone database. Currently supports MySQL, PostgreSQL, Oracle, SQLServer and any database that supports SQL92 standard and JDBC standard protocol. The core flow of data sharding is shown in the figure below: 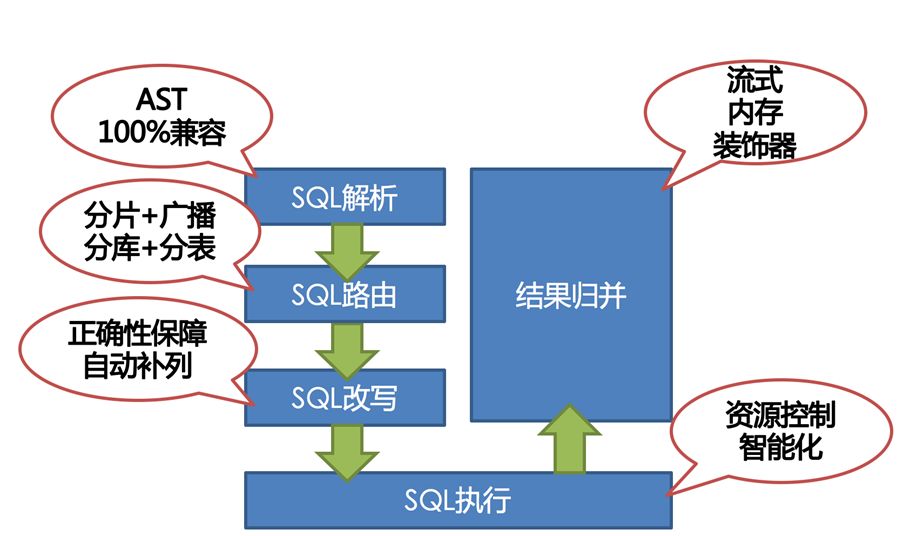 The main process is as follows:

Transaction is the core function of the database system. Distributed uncertainty and transaction complexity determine that there is no standard solution in the field of distributed transactions. 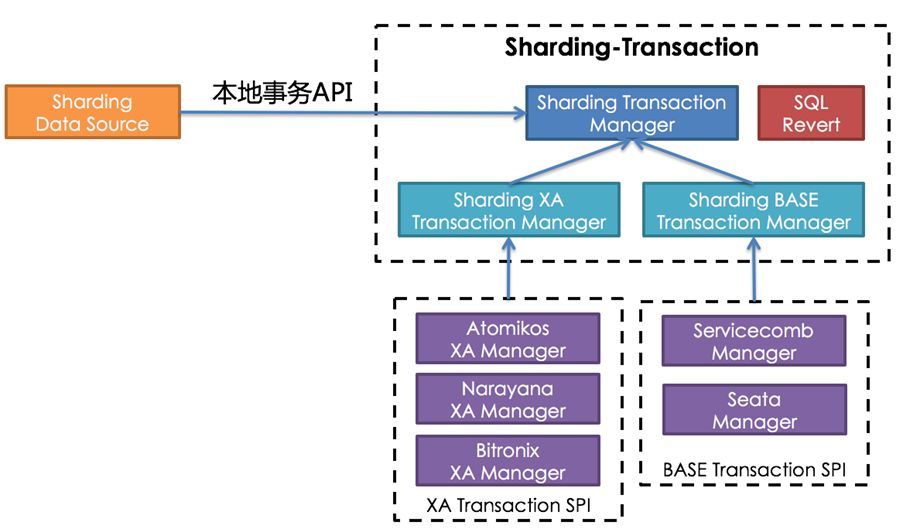 However, the integration of a large number of third-party solutions cannot cover all branches of distributed transaction requirements. Each solution has its own suitable and unsuitable scenarios. The solutions are mutually exclusive, and their advantages cannot be used together. For the most common 2PC (two-phase commit) and BASE transactions, there are the following advantages and disadvantages:

Both ACID-based two-phase transactions and BASE-based final consistency transactions are not silver bullets, and the differences between them can be compared in detail through the following table.

At present, it is difficult to find a distributed transaction solution that can be used universally without trade-offs.

JDTX uses a fully self-developed transaction processing engine to convert data in SQL operations into KV (key-value pairs), and on the basis of it, implements the MVCC (multi-version snapshot) transaction visibility engine and the database design concept. Similar WAL (Write-ahead Logging System) storage engine. You can understand the composition of JDTX through the following architecture diagram: 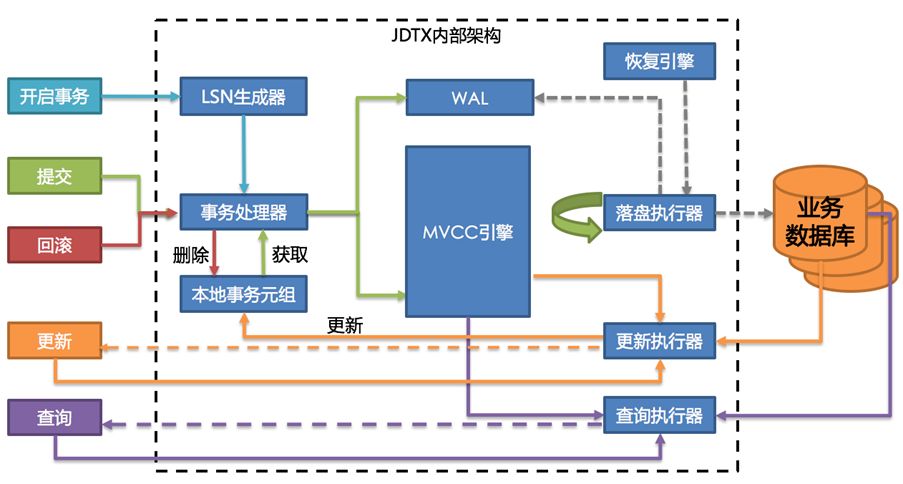 JDTX reinterprets the database transaction model with a new architecture. The main highlights are:

1. Convert distributed transactions to local one

JDTX’s MVCC engine is a centralized cache. It can internalize the two-phase commit to the one-phase commit to maintain the atomicity and consistency of the data in a single node, that is, reduce the scope of distributed transactions to the scope of local transactions. JDTX guarantees the atomicity and consistency of transaction data by ensuring that all access to transaction data passes through the active data of the MVCC engine + the final data-end data combination.

Implementing transaction isolation in the way of MVCC. At present, it fully supports the read and repeatable reads in the four standard isolation levels, which can already meet most of the needs.

The method of asynchronously flashing active data to the storage medium greatly improves the upper limit of data writing performance. Its performance bottleneck has shifted from the time of writing to the database to the time of placing it to WAL and MVCC engine.

Similar to the WAL system of the database, the WAL of JDTX also adopts the way of sequential log appending, so it can be simply understood that the time-consuming WAL of JDTX = the time-consuming WAL of the database system. The MVCC engine uses a KV data structure, which takes less time to write than a database that maintains BTree indexes. Therefore, the upper limit of the data update performance of JDTX can even be higher than that of no transaction.

Both WAL and MVCC engines can maintain high availability and horizontal scalability through active and standby and sharding. When the MVCC engine is completely unavailable, the data in WAL can be synchronized to the database through the recovery mode to ensure the integrity of the data.

The design scheme of separating transaction active data and order placement data makes its placement data storage end without any restrictions. Since the transaction active data is stored in the back-end storage medium through the asynchronous drop-off executor, whether the back-end is a homogeneous database has no effect. Using JDTX can ensure that distributed transactions across multiple storage ends (such as MySQL, PostgreSQL, and even MongoDB, Redis, and NoSQL) are maintained within the same transaction semantics. 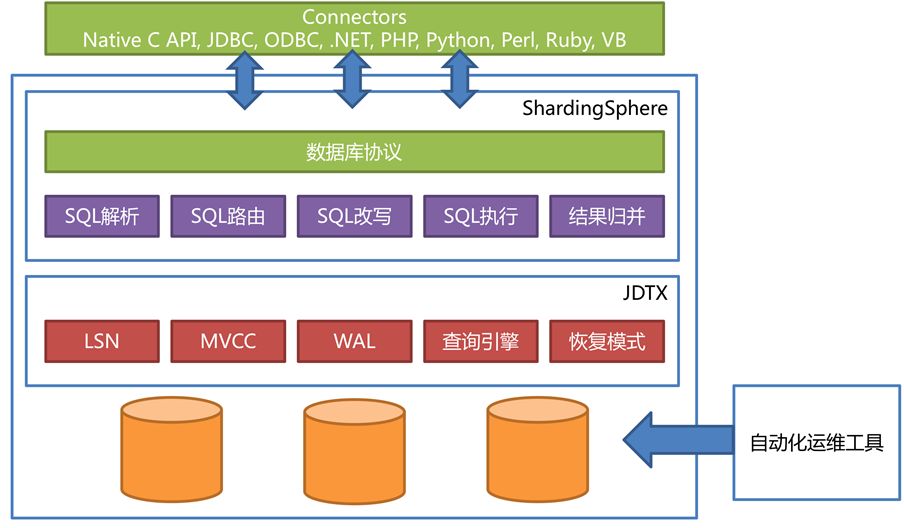 It can be said that the existence of JDTX has made Apache ShardingSphere break the position of stable database middleware, while maintaining stability, and gradually developing towards aggressive NewSQL.

Elastic scaling allows the database managed by Apache ShardingSphere to expand and contract without stopping external services. Elastic scaling is divided into two components, elastic migration and range expansion, which are currently incubating. 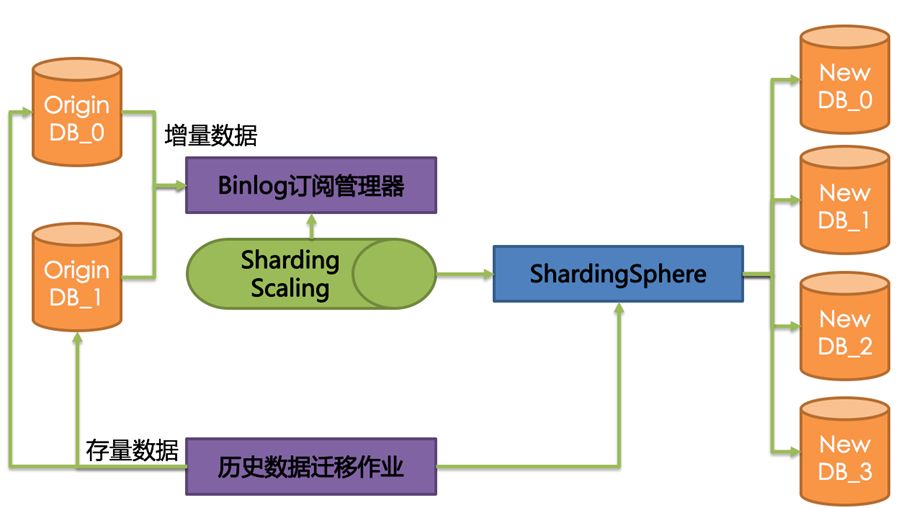 The specific process is as follows:

If elastic migration is called hard scaling, then range expansion is called soft scaling. The scope expansion of Apache ShardingSphere does not involve kernel transformation and data migration. It only needs to optimize the scope sharding strategy to achieve the goal of automatic expansion (shrinkage). With scope expansion, users do not need to be aware of the necessary concepts in the sharding strategy and sharding key and other database partitioning schemes, making Apache ShardingSphere closer to an integrated distributed database.

Range expansion users only need to provide a database resource pool to Apache ShardingSphere. The capacity inspector will look for the next data node in order from the resource pool when the table capacity reaches the threshold, and modify the range metadata of the sharding strategy after the new data node creates a new table. When there are no new data nodes in the resource pool, Apache ShardingSphere will add new tables to the database that has already created tables in the same order. When a large amount of table data is deleted, the data of the previous data node will no longer be compact, and the garbage collector will periodically compress the table range to free up more fragmented space. The structure of scope expansion is as follows: 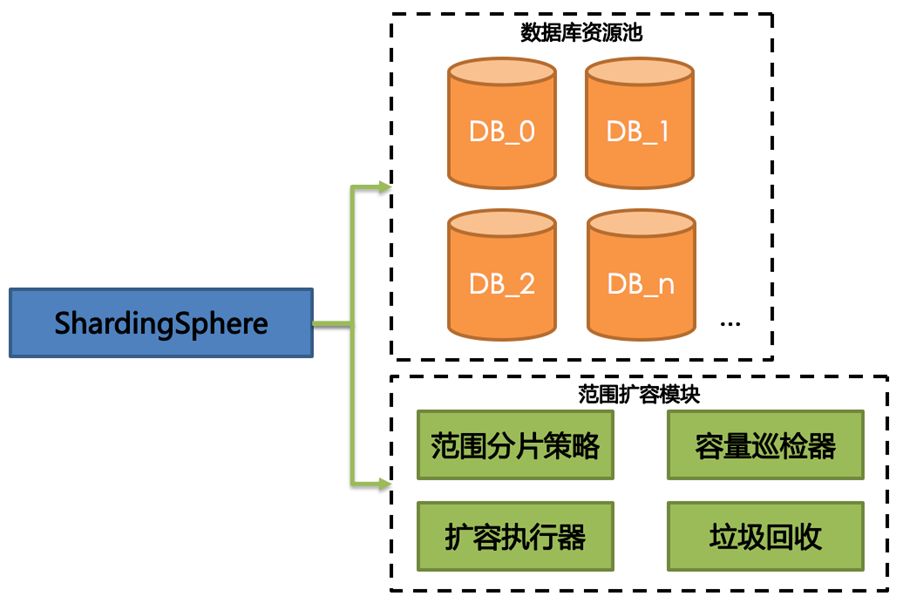 The design goal of the governance module is to better manage and use distributed databases.

In line with the design philosophy of all distributed systems, divide and governance is also a guideline for distributed databases. The existence of database governance capabilities can prevent management costs from increasing with the number of database instances.

Apache ShardingSphere is currently incubating highly available SPI, allowing users to reuse the highly available solutions provided by the database itself. The MGR high availability solution for MySQL is currently being connected. Apache ShardingSphere can automatically detect MGR election changes and quickly propagate them to all application instances.

A large number of database and access-end instances make DBA and operation and maintenance personnel unable to quickly perceive the current system status. Apache ShardingSphere implements the OpenTracing protocol to send monitoring data to a third-party APM system that implements its protocol; in addition, Apache ShardingSphere also provides automated probes for Apache SkyWalking, which allows it to be used as an observable product Of users directly observed the performance of Apache ShardingSphere, the call chain relationship and the overall topology of the system.

Thanks to Apache ShardingSphere’s flexible processing capabilities for SQL and high compatibility with database protocols, data-related governance capabilities are also easily added to the product ecosystem.

Apache ShardingSphere allows users to automatically encrypt the specified data column and store it in the database without modifying the code, and decrypt it when the application obtains the data to ensure the security of the data. When the data in the database is leaked inadvertently, the sensitive data information is completely encrypted, so it will not cause greater security risks. 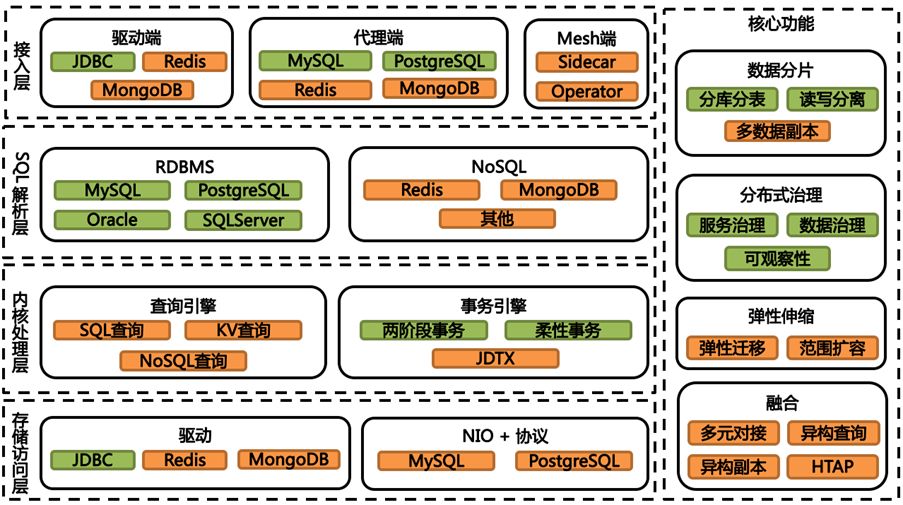 Apache ShardingSphere will be horizontally divided into 4 layers according to the technical architecture, namely the access layer, SQL parsing layer, kernel processing layer and storage access layer; and the functions will be integrated into the 4-layer architecture in a pluggable form.

At present, Apache ShardingSphere only distributes SQL to the corresponding database through correct routing and rewriting to manipulate the data. The query optimizer that calculates and issues the database that can be fully utilized, but cannot effectively support complex related queries and subqueries. The SQL on KV query optimizer based on relational algebra has become mature with the development of JDTX, and its accumulated experience is fed back to the SQL query optimizer, which can enable Apache ShardingSphere to better support complex queries such as subqueries and cross-database related queries.

The Sharding-Sidecar access point mentioned above is the third access point form of Apache ShardingSphere in the future, and aims to better cooperate with Kubernetes to create a cloud-native database.

Apache ShardingSphere was first open sourced on the GitHub platform on January 17, 2016. The original name of the open source project was Sharding-JDBC. On November 10, 2018, ShardingSphere changed its name and officially entered the Apache Software Foundation incubator.

In the four years that open source has traveled, the architectural model of Apache ShardingSphere is constantly evolving, and the range of functions of the overall product is rapidly expanding. It has gradually evolved into a distributed database solution from the Java development framework of sub-database and sub-table at the beginning of open source.

At present, more than 100 companies have clearly stated that they are using Apache ShardingSphere, and readers can find the user wall that adopts the company from the official website.